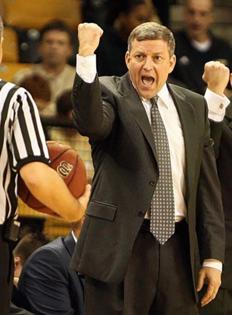 Kirk Speraw announced his retirement earlier this week as an assistant coach at the University of Iowa.

If life were fair, he would be retiring after nearly three decades as the head basketball coach at UCF.

In hindsight, the firing of Speraw as UCF’s longtime basketball coach a dozen years ago turned out to be one of the biggest injustices in UCF sports history.

For 17 years, Speraw was a good basketball coach, a mentor to his players and a loyal employee who never did anything to embarrass the program.

And maybe that was the problem. In the rancid cesspool of college basketball, Speraw refused to blatantly break the rules to bring in elite talent even though that’s seemingly what UCF’s administration at the time wanted him to do.

During Speraw’s tenure, he took the Knights to their first four NCAA Tournaments (they’ve been to only one since his departure) and became the school’s all-time winningest coach. And he did it with little administrative support throughout much of his career. Speraw was given a shoestring budget, operated under short-term contracts and was set up to fail by former athletic director Keith Tribble.

Speraw was eventually fired by Tribble, who clearly wanted to bring in his own coach and upgrade recruiting by operating outside the NCAA rules. How do we know this? Because, in one of the darkest days in UCF sports history, Tribble himself was eventually fired by the school for misleading NCAA investigators and for being the one largely responsible for getting the Knights put on NCAA probation. It was Tribble himself who gave a convicted felon and a runner for a sports agent access to UCF’s program in a failed attempt to steer top recruits here.

As you would expect, Speraw took the high road when I spoke with him earlier this week and asked him if he holds any grudges against Tribble or any of UCF’s past administrators for their lack of commitment to his program. Instead, he lauded Steve Sloan, the original AD who hired him.

“I think back on some of that stuff and it’s disappointing that we didn’t get the support that maybe we should have at certain times,” Speraw says. “But let me say this, Steve Sloan was tremendous and absolutely supportive and doesn’t get the credit he deserves for running an athletic program on a tight budget and not putting the program into debt because he was told not to put the program in debt. Other ADs had some great attributes, too, and were supportive at certain times, but not as supportive at other times.

“I’m proud of the program we had at UCF,” Speraw added. “We always tried to do things the right way. It was such a transformative time for the university and the athletic teams. Moving the program through all the transitions of difference conferences, the financial issues, the limited resources during my time there — and, yet, we were still competitive at a high level, got to the NCAA Tournament four times and played really well in some of those NCAA Tournament games. When you look back on it, man, we went through a lot of stuff, fought every day to be the best we could be and battled through a lot of adversity to build the program to a point where it could take huge steps later on.”