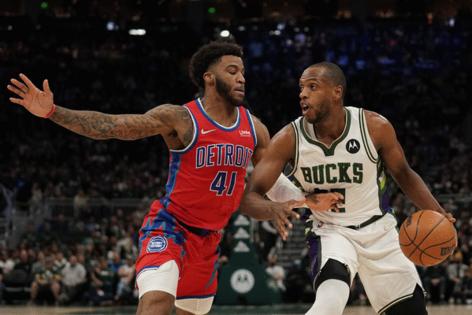 The defending-champion Milwaukee Bucks don’t need any help in getting out to a big lead or getting their offense jump-started.

The Pistons got off to a sluggish start and the Bucks raced to a 14-0 lead in the first three-plus minutes. The lead ballooned to as many as 17 points, but the Pistons got the margin down to three in the second quarter.

They just didn’t have enough of an arsenal to stay with the Bucks the rest of the way.

The Pistons continue their five-game road trip on Friday at the Los Angeles Clippers.

The Bucks (11-8) started 4 of 5 from the field, with a dunk by Jrue Holiday (22 points, eight rebounds and six assists) and a free throw and put-back by Giannis Antetokounmpo (33 points, seven rebounds and five assists) and a dunk and 3-pointer from Bobby Portis (28 points and 10 rebounds).

Antetokounmpo had another dunk and two more free throws before the Pistons got their first basket, a lay-in from Luka Garza at the 8:41 mark, for a 14-2 margin. Portis added a tip-in and Antetokounmpo a lay in for a 16-point lead.

With another 9-2 run, the Pistons got back within 10, including a tip-in by Lyles and a jumper and two free throws from Grant. Saben Lee, who got some extended time as the backup point guard, had 12 points, five rebounds and five assists. His 3-pointer cut it to 30-20, and Lyles finished the quarter with a three-point play and a 3-pointer, to finish a 17-6 run, but the Bucks led, 32-26, entering the second quarter.