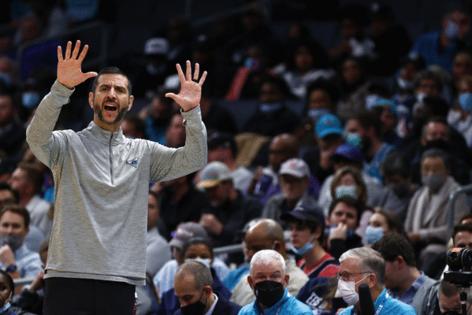 ORLANDO, Fla. — The Magic lost their fourth straight Wednesday night falling to the Charlotte Hornets 106-99 at the Amway Center on the eve of Thanksgiving.

Orlando turned the ball over 14 times and the Hornets took full advantage scoring 21 fast breakpoints. Charlotte got a big boost off the bench from Kelly Ourbre Jr. who scored 21 of the team’s 38 points from non-starters.

The Hornets were led by Terry Rozier who finished with 27 shooting 50% from the field. LaMelo Ball added 22 points. Despite scoring 31 last time these two teams met, Miles Bridges was held to just 11 by the Magic.

All of Orlando’s starters finished in double digits as Mo Bamba led the way with 18. Rookie Jalen Suggs wasn’t far behind with 17. Franz Wagner scored 16 while Wendell Carter Jr. finished with 14 and 11 rebounds.

Wagner’s brother, Mo, provided 13 points off the bench, 10 of which came in the first half.

Orlando led 74-67 with 4:03 left in the quarter but the Hornets used a 15-3 run to enter the fourth quarter with a lead. Charlotte’s scoring run would have been unanswered had it not been for a 3 from Mo Wagner as the buzzer sounded.

The Magic failed to score in the final 4 minutes of the quarter outside of Wagner’s three.

Charlotte packed on the points in the fourth quarter as the Magic continued to miss shots and turn the ball over. Orlando struggled from three making just 15 of their 42 attempted.

Neither team shot the ball well in the first half but Charlotte led 52-49 despite both sides finishing under 40% from the field. There were 9 leads changes in the opening half alone.

The Magic led by as many as 7 in the first half but three different Hornets reached double digits by halftime. Meanwhile, Orlando only had one scorer with at least 10 points — Mo Wagner (10) off the bench — at the break.