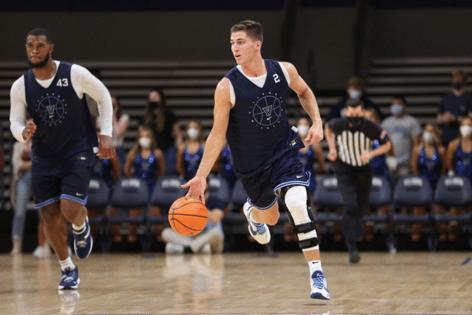 NEW YORK — As a younger guy, Collin Gillespie seemed like an older soul, at least in basketball terms. Now officially an old guy, since 22 is practically elderly in college basketball terms, Gillespie elicits groans of respect from opposing Big East coaches as he prepares for his fifth season of college hoops.

“I feel like Gillespie was at my wedding,” said Providence coach Ed Cooley on Tuesday at Big East Media day at Madison Square Garden.

“He could do the scouting reports by now,” said Xavier coach Travis Steele.

Big East coaches voted Gillespie as their preseason choice for player of the year, figuring that his recovery from surgery last winter for a torn medial collateral ligament in his left knee wouldn’t stop Gillespie from being a big force in league play.

Of the 10 opposing Big East head coaches, only three even had their current jobs before Gillespie got to Villanova: Cooley at Providence, Greg McDermott at Creighton, and Kevin Willard at Seton Hall. A couple more got there the same year, 2017-18, so they haven’t done their job without Gillespie on their scouting report.

Look at his status this way: Gillespie played 16 productive minutes in Villanova’s 2018 NCAA title game victory over Michigan. Only two current NCAA players, Kihei Clark at Virginia in 2019 and Adam Flagler at Baylor this season, have played more minutes in a title game.

Or look at it this way …

When Gillespie and Villanova teammate Jermaine Samuels were freshmen on that ‘18 championship team, the current Villanova freshmen were in eighth grade.

“That’s weird,” Gillespie said of that one. “I feel a little older now.”

Gillespie wasn’t cleared to fully work out until August, so his role this summer was different than his usual kind of coach on the floor. Over the years, Jay Wright has had some of the finest coaches on the floor in NCAA hoops. This, Villanova’s coach said, is different.