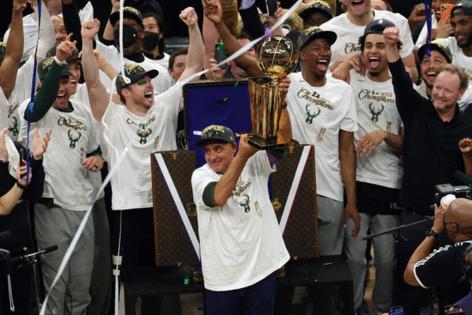 The Bucks finished dead-last in the cavernous and empty Bradley Center with 67 losses, without much evidence that the skinny rookie from Greece would be so much more than a very difficult last name to spell.

Lasry, a Wall Street billionaire, entered this small-market domain in the midst of 18 straight years without a Bucks playoff series victory. They were dead-last in attendance.

And on Tuesday night, they captured the franchise’s first title in 50 years, celebrating inside a new $524 million arena and with 65,000 Bucks fans watching outside on a Jumbotron.

“At each moment, and each step in time, we got very lucky,” Lasry told the New York Daily News in a phone interview. “We wanted to build the arena and were able to build it, and the state ending up coming through, the city came through so that we could build the arena. Then being able to sort’ve put the team together. Giannis staying as well.

“It sort’ve feels like this was our moment in time.”

The lion’s share of the credit belongs to Giannis Antetokounmpo, who developed his game and his body, working tirelessly with a litany of trainers and coaches, most notably former Bucks assistant Sean Sweeney. He became the best player in the regular season, then the best player in the NBA Finals. Whereas other megastars like Kevin Durant, Anthony Davis and LeBron James darted from their draft-day teams because winning a title was too difficult in a small market (LeBron returned to Cleveland, of course), Antetokounmpo followed through on all his promises.

“He’s a great guy and he’s a sweet guy. He loves the city, and he loves his teammates. Couldn’t ask for a better person,” Lasry said of his star. “The biggest moment of his career he scores 50 points and makes 17 out of 19 free throws. You couldn’t have predicted that.”

But Antetokounmpo’s rise also coincides with Lasry’s ownership, which has become the shining example of big-market money taking over a small-market franchise.

Would Antetokounmpo have signed his extension if the team were still playing in the now-demolished Bradley Center? Would a championship been possible if Lasry and Edens weren’t willing to dip into the luxury tax, taking on one of the league’s highest payrolls?

It’s impossible to know. But it came together spectacularly Tuesday night, when Lasry anxiously watched his Bucks break a 50-year drought.

“It was surreal. It was fun. It was exciting,” he said. “While it was happening, you were praying to every God known to mankind, saying, ‘Please hold the lead.’ It was phenomenal experience.”