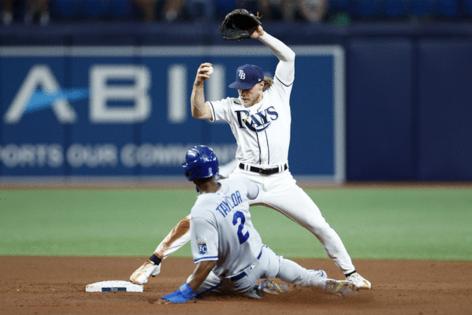 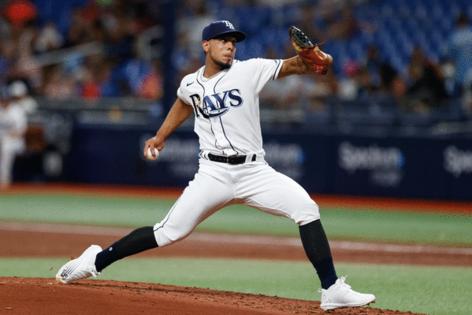 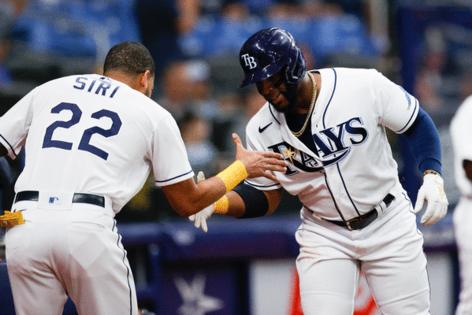 On this night, a mere 19 hours after a 10-inning walk-off loss in The Bronx, a quality start proved more stimulating than caffeine.

Recalled from Triple-A Durham to provide an extra day’s rest to the starting rotation, right-hander Luis Patino delivered in a 7-1 triumph against the reeling Royals (48-72) before a Tropicana Field audience of 8,168. Tampa Bay (63-54), winner of five of its last six, is one game behind Seattle (65-54) for the American League’s top wild-card spot.

Making his first big league start since July 23, Patino allowed only four hits in 5 2/3 innings. He allowed no runner to reach second until the sixth, when he walked cleanup hitter Vinnie Pasquantino after issuing a single to Salvador Perez.

But beleaguered left-handed reliever Collin Poche forced pinch-hitter Brent Rooker to fly out to left field and followed with a perfect seventh.

As for run support, Patino and the pen got all it would need before most of the fans had been seated.

Diaz has a homer, four doubles and eight RBIs in his last four contests.

Second baseman Brandon Lowe, mired in a 1-for-24 swoon, followed Diaz’s hit with a run-scoring single to center field. Randy Arozarena then delivered a sharp fly to the right-field wall to score Diaz, and a Keller wild pitch scored Lowe.

The Royals’ lone run came on second baseman Michael Massey’s leadoff home run in the eighth, snapping Kansas City’s scoreless-innings streak at 33. Rays catcher Christian Bethancourt got the run back with a one-out solo homer — his sixth — in the bottom of the inning.

CINCINNATI — Of all the possible routes the Chicago Cubs could take in the offseason to upgrade the roster, the outfield features some of the least positional flexibility.

PITTSBURGH — Prior to Wednesday’s season finale, which turned out to be a 5-3 win over the St. Louis Cardinals, Pirates manager Derek Shelton admitted that he gets frustrated too, sometimes.

Much of that pregame ...Read More

The Twins designated hitter walked twice and doubled before leaving in the third inning as the Twins stomped the Chicago White ...Read More

LOS ANGELES — The 2022 season began with hyperbole about the Dodgers fielding one of the best teams ever.

Six months later, It ended with them having done just that.

OAKLAND, Calif. — Stephen Vogt turned on a 94-mph fastball from Zack Weiss and watched it sail into the right-field seats. Vogt rounded first base — high-stepping along the way — with a hysterical Coliseum crowd ...Read More