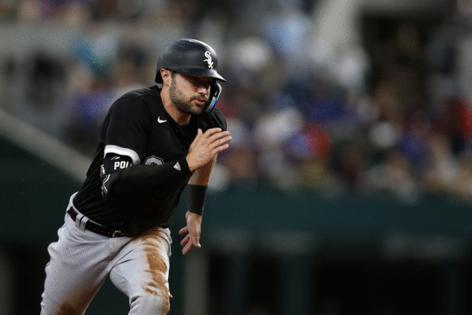 Pollock sparked the offense with three hits, a run and an RBI in an 8-2 victory against the Texas Rangers in front of 29,579 at Globe Life Field.

“Big hits,” Sox manager Tony La Russa said. “That’s what you need sometimes. Especially the first three games (of the series), we couldn’t get something going. (In) Tim’s spot, (Pollock) was the igniter. First couple of hits were clutch.”

Andrew Vaughn hit a two-run homer and Luis Robert drove in two with a double as the Sox salvaged a split of the four-game series.

“The offense put it on them,” Pollock said. “It’s what we needed. (Saturday) I thought (Rangers starter Dane) Dunning threw really well, and it looked like we were flat. We came ready to play, we prepared. It just wasn’t working.

“It was good to come out (Sunday) and get some runs early and pile it on. I thought we played a good game.”

After three subpar nights in which they scored a combined four runs, the Sox offense did a little bit of everything Sunday.

There was two-out scoring as Pollock drove in Josh Harrison with a single in the second for the game’s first run.

The Sox showcased power when Vaughn launched his two-run homer in the third to make it 3-0.

They made the most of a mistake an inning later. Rangers shortstop Corey Seager booted a Leury García grounder to begin the fourth. García scored on Robert’s two-run double, and Robert scored on an Eloy Jiménez single.

Kansas City Royals pitcher Kris Bubic finished a rocky year with a rock-solid start in his final outing of the season, against the Cleveland Guardians on Saturday, and the Royals’ bats did their part to support their ...Read More

HOUSTON — Having clinched a playoff berth on Friday, the Rays head into the final days of the regular season with a few things still to play for.

Most prominent is their seeding among the three American League wild-card...Read More

ATLANTA — The Atlanta Braves have quite possibly one of the deepest lineups in baseball. The Mets assembled a starting pitching rotation that they believed could counter that lineup.

But if the big-game pitchers don’t...Read More

WASHINGTON — At about 4:30 p.m. Saturday, in the 157th game of the season, with a playoff spot in sight, against the worst team in the league, a backup infielder walked to the mound to get the final out of the eighth ...Read More

What Luis Ortiz had done to this point felt like finding a $20 bill in your back pocket.

A solid pitcher but not necessarily one of the Pirates’ premium prospects, the 23-year-old right-hander spent the majority of this...Read More

DETROIT — This one was a little gnarly.

A single being played into a triple. A missed cut-off man resulting in two free bases. A runner getting picked off second base with the bases loaded. A poorly-timed wild pitch.