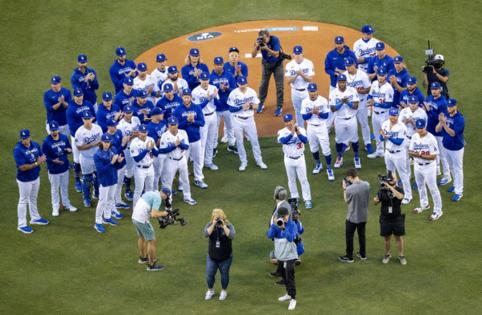 LOS ANGELES — It was deafening. It was discordant. It was perfect.

With the five words that formed Vin Scully’s signature, Los Angeles etched his memory into the Dodger Stadium skies.

“So now, 50,000 Dodgers fans, get on your feet,” exhorted Dodgers manager Dave Roberts from the middle of the infield early Friday evening. “On the count of three, yell as loud as you can so Mr. Vin can hear us from Blue Heaven!”

And then it erupted, from the depths of their sorrow, from the top of their lungs, a cheer straight from the heart of the most powerful connection in this city’s history.

In all, it was an appropriately poetic ending to a poignant tribute to Scully, the longtime Dodgers announcer who died Tuesday at 94.

Staged during Friday’s opener of a weekend series with the San Diego Padres, this was the Dodgers first chance to honor Scully in front of his beloved fans since his death. Considering he was steadfastly private and beyond humble, this probably served as his only public memorial service.