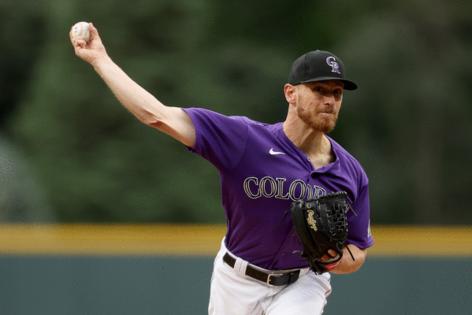 The right-hander threw a three-hit shutout in the Rockies’ 4-0 win over the Dodgers Monday night. Kuhl struck out five and didn’t walk a single batter.

When Freddie Freeman lined out to center fielder Yonathan Daza to end the game, Kuhl pumped his fist, much like an Avalanche player after they won the Stanley Cup Sunday night.

Kuhl became the first Rockies pitcher to throw a shutout since German Marquez took a no-hitter into the ninth inning against the Pirates on June 29 of last season at Coors Field. Marquez finished with a one-hit masterpiece.

Bryant, returning from a back injury that had kept him out of the lineup since May 22, started in left field and went 1-for-4. His leadoff single in the third inning was his first hit since May 21.

Left-hander Tyler Anderson, the former Rockie whose career has been rejuvenated in Los Angeles, was the pitcher in the spotlight coming into the game. But Kuhl was the better pitcher Monday night.

Anderson has pitched like an ace for the Dodgers this season, entering Monday’s game 8-0 with a 3.00 ERA. But he looked very much like the pitcher who never harnessed his talent during his four seasons with the Rockies when he went 11-14 with a 4.09 ERA in 43 appearances (41 starts).

The Rockies ripped him for four runs on 10 hits over six innings. The biggest swing of the bat came from Jose Iglesias, who launched a two-run, 432-foot homer to left field in the sixth. Iglesias took a moment to admire his homer while standing at the plate. And why not? He’d gone 262 at-bats without a home run.

Colorado jumped on Anderson quickly. Connor Joe led off the first with a double to left-center on Anderson’s 2-2 changeup. Bryant advanced Joe to third on a deep flyball to right and Joe scored on C.J. Cron’s single to right.

The Rockies made it 2-0 in the second on Randal Grichuk’s two-out double and Elias Diaz’s RBI single to center.