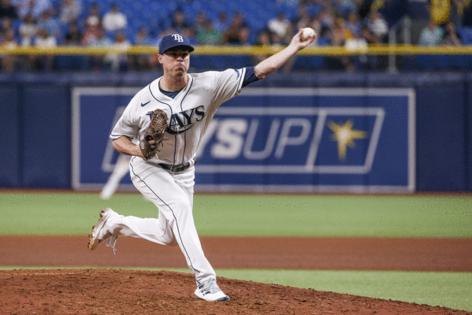 The reliever grew up in that town and attended Robb Elementary, where the shootings occurred.

“I walked those halls,” Raley said Wednesday. “I can’t imagine what they experienced. …

“Just a tragedy. Obviously, growing up there, going to that school, it kind of hits home. Having young children myself, you just feel for those families. You pray for them. And your thoughts are with them.”

Raley moved from Uvalde, a city of 16,000 about 90 miles west of San Antonio and 75 miles from the Mexico border, after attending Texas A&M. But he still has family there, including his parents and his younger brother, Cory, who is married and has a young daughter.

“I’m feeling for that community,” Raley said. “It’s a small, close-knit community. It’s obviously a tough day today of mourning. … A lot of good people there, a lot of very good families and whatnot. So it’s a tough time.”

The Rays and other major league teams observed a moment of silence for the victims before Wednesday’s games.

The gunman reportedly bought two AR-15-style rifles at Oasis Outback, a sporting goods store about three miles from the school. Raley and his brother are co-owners of Exile Firearms, a company also based in Uvalde that makes and sells custom rifles for hunters.

Raley said he first heard about the shootings just before Tuesday’s game but didn’t get much information until afterward. He then started reaching out to people in Uvalde for more information, including his parents.

“You obviously want to check in on people and see how they’re doing and whatnot,” he said. “But I don’t think we have answers to a lot of questions.”

Raley said he offered to provide assistance through fundraising or other avenues whenever needed.