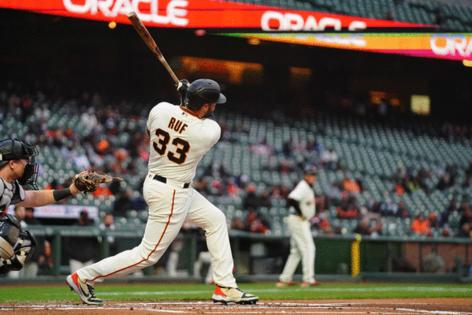 SAN FRANCISCO — A pair of home runs from Darin Ruf and a ninth-inning rally that forced extra innings wasn’t enough for the Giants to start their home stand on a positive note.

The Giants got two Ruffian blasts off Padres starter Sean Manaea and a season-high six innings from their own hurler, Jakob Junis, but lost the battle of late-inning rallies in an eventual 8-7 defeat to the Padres.

Here are a few takeaways.

Without the services of closer Taylor Rogers, the Padres sent Luis Garcia out for the ninth inning to try to close out a 6-4 lead, after San Diego took the lead off Taylor’s twin brother, Tyler, in the top of the eighth.

For the first time all game, Giants hitters not named Darin Ruf came to life.

Ruf had already homered twice, then took ball four from Garcia in the ninth. He was preceded by a single off the bat of Mike Yastrzemski and followed by another walk to pinch-hitter Joc Pederson, bringing up Wilmer Flores with the bases loaded and Ruf as tying run on second base.

Flores, who singled in the second and scored the Giants’ first run of the game, lofted a soft-hit line drive over the outstretched glove of shortstop Ha-Seong Kim and just in front of left fielder Jurickson Profar, allowing Yastrzemski and Ruf to chug home, just beating the throw at home plate.

Tommy La Stella struck out with the winning run on second base to end the inning but started the 10th by scoring as the Giants’ ghost runner on a base hit by Brandon Crawford. Both teams were able to drive in their free runner in extra innings, but it was Padres’ ability to plate one more that won them the game.

Flores’ heroics would quickly prove for naught, as Manny Machado led off the 10th inning off Camilo Doval by driving in the ghost runner on second base, then scored what would prove to be the decisive run when Profar ripped a single off Doval’s foot — only the second and third runs allowed by Doval over his past 152/3 innings.