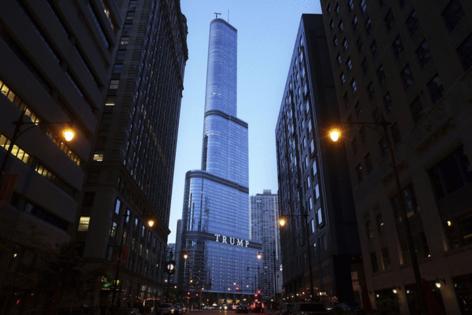 Back in 2014, Donald Trump wrote an op-ed for this newspaper titled “Why I love Chicago and My Sign.” Trump was fighting back against Chicagoans who objected to five massive letters affixed to Trump’s International Hotel and Tower, viewing them as an affront to the city’s architectural glory. The letters, T-R-U-M-P, ruined the view of the city, especially when looking north up Wabash Avenue.

The newspaper’s then-architecture critic, Blair Kamin, waged an intense fight against this visual pollution on our pages. But anyone who has blinked at downtown of late knows who won.

Time’s up, Trump. But, first, some history.

That deal was boosted by a $50,000 contribution to then-Mayor Rahm Emanuel’s mayoral campaign and $5,000 to Ald. Brendan Reilly’s, in whose ward the tower resides. And let’s not forget that Trump hired the property tax law firm of now-indicted Ald. Edward Burke, 14th, who helped him reduce his property tax bill by over $12 million during a six-year stretch, an investigation by the Chicago Sun-Times found. Assuming Trump signed something close to the usual appeal deal, that would have meant millions accrued to Burke, now accused of corruption by the federal government.

In 2021, Ald. Gilbert Villegas, 36th, sponsored an ordinance that would ban “any person convicted of treason, sedition or subversive actions from doing business with the city, including having a sign permit.” That was a broadside against the sign, which Villegas said did not conform with “Chicago’s values.”

This editorial board did not support Villegas’ ordinance. “Chicago values?” we wrote. “Are freedom of expression and private property rights also Chicago values? It’s Trump’s building, and he should have the prerogative of stamping his name on it. The city once conceded as much.”

That was true. And we didn’t stop there: “Aldermen and Chicago Mayor Lori Lightfoot obviously are tempted to get swept into anti-Trump fever and chest-thumping about taking down a sign. But they also would be reneging on an agreement; they would be inviting a lawsuit that the city could lose and would be costly to defend; and they would be trampling on private property rights. They would be wise to swallow their distaste and leave the sign alone.”

But two things happened this week. The first was that Trump himself called for “the termination of all rules, regulations, and articles, even those found in the Constitution,” in support of his baseless claims of massive fraud in the 2020 election. Just Trumpian blather, the man’s defenders said. Nothing to do with the Trump Organization or the sign.