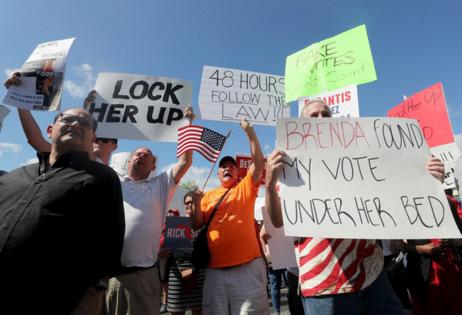 FORT LAUDERDALE, Fla. — Former President Donald Trump repeated claims this week that votes were being “stolen” as part of the “corrupt Election process in Broward County” in 2018, and asserted “the ballot theft immediately ended” after he sent in the FBI and Justice Department.

There is no factual evidence to support Trump’s assertions about corruption, ballot theft, or the involvement of the FBI and Justice Department.

Multiple people, all of whom would have been in a position to know if Trump had, as president, done what he stated — “sent in the FBI and the U.S. Attorneys” — disputed his contention on Friday.

—“Never happened,” said Sarah Isgur, who was spokeswoman for Trump’s Department of Justice at the time, wrote Friday on Twitter.

—Fred Bellis, who was operations director under then-Supervisor of Elections Brenda Snipes, said the FBI “was working with us on cybersecurity,” but said he doesn’t remember FBI agents ever coming into the Broward elections office.

—One person with intimate knowledge of what was going on with Broward vote-counting in 2018 told the South Florida Sun Sentinel representatives from the FBI and Justice Department didn’t present themselves to election officials: “If the FBI and the U.S. attorney were there, I can tell you we didn’t know.”

—Another person involved in the process said, “If I had to testify, I would say what he said was completely false,” adding, “I have absolutely no recollection of that. That’s one of the things that would have stuck in my mind, I believe.”

Four people, none of whom worked for Snipes but had extensive knowledge of what was happening with vote counting, provided details Friday about what happened days following the 2018 voting. They declined to be named for several reasons, including not being authorized by their current employers and not wanting to get in-person or online blowback from Trump supporters.

A scathing 2020 audit from the Broward County auditor found multiple mistakes with the 2018 election, an assessment shared by many people familiar with what transpired — but not evidence of intentional wrongdoing or criminal activity.

“It’s totally untrue. There were no votes stolen,” said Bellis, who was a top Snipes lieutenant. “There was no fraud.”