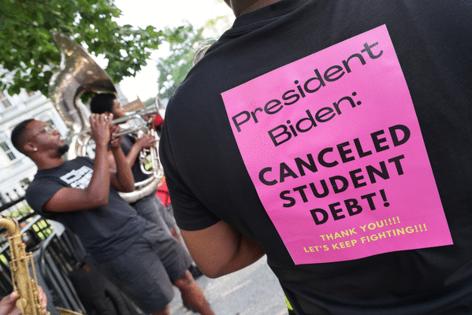 Amid the stir caused by President Joe Biden’s plan to cancel student loan debts, far too little attention has been paid to another far-reaching reform: the administration’s change to a lending program known as income-driven repayment (or IDR). If widely applied, Biden’s proposal would provide additional relief to millions of borrowers — and make the U.S. student loan system even costlier and more dysfunctional than it already is.

Unlike in standard 10-year loans, in which payments are fixed, borrowers in income-driven plans pay a percentage of their earnings each month, plus interest on the principal. The terms of such plans have become more generous since they were introduced in the 1990s. Current students who enroll in IDR pay 10% of their earnings above 150% of the poverty line and have their outstanding balances forgiven after 20 years. Low earners typically pay nothing at all.

The goal of income-driven repayment schemes, which are common in the UK and Australia, is to provide a safety net for borrowers who lose their jobs or encounter other setbacks, reducing their risk of default. In practice, however, the complexity and voluntary nature of the U.S.’s IDR system has limited its take-up among the low-income students who would benefit most. Instead, the bulk of funds dispersed through IDR plans go to those who took out loans for graduate studies — which most will never repay in full. Though less than one-third of borrowers overall are on IDR plans, they account for half of total outstanding student loan debt, carrying average balances that are twice as large as those on standard plans.

Rather than restrain the ballooning costs of this system, the administration’s changes do the opposite. Under the Biden plan, borrowers would pay 5% of their income each month, and only on earnings above 225% of the federal poverty line. Students who take out loans of $12,000 or less would have all outstanding balances forgiven after 10 years. The plan also forgives unpaid monthly interest if borrowers make their required payments.

The administration says the revised terms would ease the burden on struggling borrowers and dropouts. That may be true — but high-income borrowers would benefit even more. According to one analysis, a typical student who takes out college loans but fails to graduate would pay $92 less per month under the Biden plan than on a standard 10-year loan; doctoral degree holders, meanwhile, would get an average monthly break of $1,278. What’s more, as another points out, since roughly 70% of current and future borrowers could eventually receive forgiveness for some or all of their balances, the government stands to lose at least half the value of its student loan portfolio.

By making such generous terms available to all borrowers, the plan incentivizes students to take out bigger loans, increases overall student loan debt, drives up costs for taxpayers, and subsidizes upper-income professionals at the expense of the nearly 40% of Americans without any college education. Worse, it will only encourage colleges to continue raising tuition and weaken accountability for those that fail to prepare students for good-paying jobs.

The administration should scrap this plan and instead work with Congress to improve the current system. The government should make enrollment in existing IDR plans simpler for lower-earning students, while also expanding targeted aid through federal Pell grants, which would limit the amount that poor students have to borrow in the first place. Meanwhile, high earners should be required to pay a larger share of their incomes and receive less in loan forgiveness. Imposing limits on the amount that can be borrowed for graduate school would discourage students from pursuing exorbitantly priced credentials at taxpayer expense.

Reducing the cost of a postsecondary education, particularly for poorer students, is a goal worth pursuing. This plan is the wrong way to go about it.