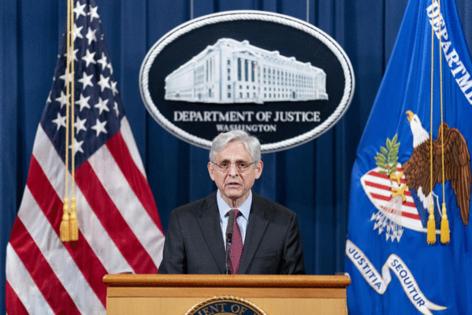 Attorney General Merrick Garland has insisted that “no person is above the law in this country,” and it appears that he meant it. The FBI search of former President Donald Trump’s Palm Beach home, Mar-a-Lago, could not have happened without Garland’s knowledge and approval.

The concept that no one is above the law has been the theme of countless patriotic speeches. It seemed to be a point of national consensus. But some important Republicans, beguiled by or beholden to Trump, have forsaken that bedrock principle of equal and impartial justice.

The hysterical reactions by Kevin McCarthy, Rick Scott, Ron DeSantis and others to the execution of a search warrant would put the ex-president beyond the reach of the law. They have all showed why they don’t belong in positions of power.

It’s inconceivable that the FBI would invade the home and safe of a former president without the attorney general’s approval. Nor is it likely that any federal magistrate or judge would have approved a warrant for Trump’s home without some strong evidence of criminality. (It wasn’t a “raid,” either. Trump was not there, but the Secret Service was notified in advance).

The true test of Garland’s promise will be whether Trump is actually indicted.

The raid on Mar-a-Lago reportedly concerned suspected violations of the Presidential Records Act in regard to sensitive classified material. The National Archives had already found 15 boxes of documents there and asked the Justice Department to investigate. It’s been reported that, while in office, Trump flushed documents down White House toilets.

The classified document issue would be weighty enough. Of great or greater danger: Trump’s domestic schemes to overturn the 2020 election, his willful delay in calling off the violent mob that was obstructing the electoral vote count on Jan. 6, 2021, and his ongoing, relentless intimation that the American people cannot trust the outcome of any election, particularly not one that he loses.

Those were — and are — the hallmarks of a dictator.

Rep. McCarthy, R-Cal., and the usual claque of Trump’s enablers weren’t waiting or caring to find out what the Justice Department might actually have found at Mar-a-Lago, what DOJ might do with it, or what allegations persuaded a judge to authorize the search.