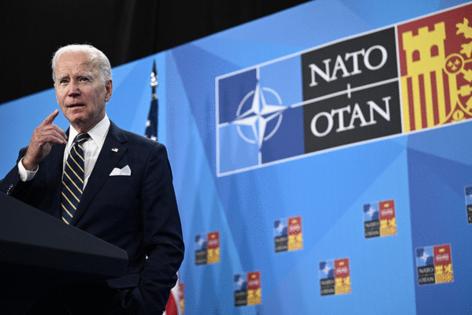 WASHINGTON — He is facing high inflation, a potential recession and a domestic agenda languishing in the Senate. Last week the Supreme Court overturned Roe v. Wade, the landmark abortion ruling, and this week upended his climate plans. A looming midterm elections look dire for his party, and his base is frustrated. Pressure is mounting on President Joe Biden to take action.

"The White House needs to move faster and do more on at least the executive actions that we've already outlined for them, that we've been in discussion with them on," Democratic Rep. Pramila Jayapal, chair of the Congressional Progressive Caucus, said in an interview. "It feels like the delays overwhelm the actual action."

If only it were so easy, say those close to Biden, pointing to serious problems facing the president if he were to issue a flurry of executive orders in coming months. While such actions might satisfy his base, for a time, they are also likely to leave portions of it disappointed and won't bring about the dramatic change some Democrats are seeking.

Executive orders are at best temporary measures — easily reversed by the next president or overturned in court — and frequently ineffectual. As a creature of the Senate, in which he served for more three decades, Biden prefers legislating to governing by executive fiat.

If history is a guide, Biden is likely to follow in the footsteps of previous presidents who issued a raft of executive orders ahead of midterm elections. With Congress gridlocked, Democrats and experts say, the president has to be seen as doing something — especially after the Supreme Court jettisoned nearly 50 years of legal protection for those seeking an abortion, something most Democrats view as a fundamental right.

"This is an all-hands-on-deck moment," said Sen. Patty Murray, D-Wash., who said she's urging Biden to "really push the envelope" with what he can do to protect abortion access.

The abortion case crystallizes the conundrum facing Biden and Democrats. While Biden has taken some action — he directed his administration to ensure abortion drugs are available and to help women seeking out-of-state abortions — he has resisted calls to take more aggressive steps pushed by progressives.

"I believe we have to codify Roe v. Wade into law. And the way to do that is to make sure that Congress votes to do that," Biden said during a press conference on Thursday at the end of a NATO summit in Madrid, echoing comments he made the day the ruling came down.

The president added that he felt "extremely strongly that I'm going to do everything in my power which I legally can do in terms of executive orders, as well as push the Congress and the public" to protect abortion rights.

Some Democrats argue Biden's hesitation to take a bolder approach on abortion rights is emblematic of an overly cautious approach to addressing several issues he promised to tackle as president.