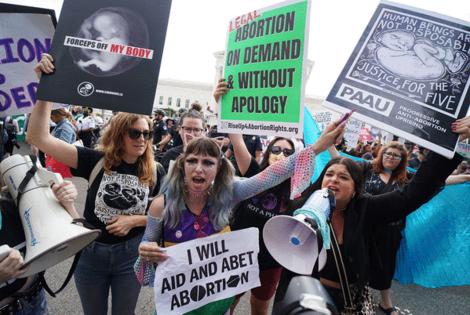 By striking down Roe v. Wade which has for nearly five decades protected the right of women to terminate pregnancy, the U.S. Supreme Court has not only turned its back on legal precedent and many of their own personal pledges to uphold Roe as “settled law” made during U.S. Senate confirmation hearings, it has assured that the United States will remain a nation deeply divided over the fundamental right of women to choose. So-called “trigger” laws mean roughly half of states as close to Maryland as West Virginia and as large as Texas and Ohio will soon drastically restrict access to abortion. Thankfully, Maryland is not one of those states, but the consequences of this dramatic and historic reversal are far-reaching and serious, particularly to women who may not even realize they are pregnant at this moment — or until they are past the six-week window for abortion that some states will now (or soon) impose.

Given the draft opinion leaked earlier this year, the ruling comes as no surprise. This was delivered by a Supreme Court now firmly controlled by justices with extreme right-wing views who just one day earlier saw fit to ignore precedent and reject New York’s century-old limits on carrying guns outside the home. But it also raises a question: What other fundamental rights will be struck down by the conservative majority that so willingly sets aside stare decisis and did the political bidding of their political benefactors? Same-sex marriage? The right to contraception? A return to bans on sodomy? The court’s majority appears divided on them — for now.

Whatever protests and speechmaking we witness out of Washington, D.C., in the days ahead, it seems highly unlikely that much can be done about it in Congress where the Senate is too evenly divided to ever imagine a legislative remedy — including a suspension of the Senate filibuster rule that would be required to enable passage of most any legislation of consequence. And while we are proud to see our fellow Americans exercise their free speech rights, perhaps the best that can be hoped is for voters to recognize that who they elect to the White House and Congress matters — Republicans, particularly under Donald Trump, have made a near-universal opposition to women’s reproductive rights one of the defining tenets of their political party.

That leaves it to states like Maryland to protect women’s rights. No longer must we think in terms merely of providing reasonable medical options to Marylanders seeking to terminate their pregnancies but to welcome women from elsewhere who will surely be seeking help as well. Make no mistake, this will require more than reaffirming rights or keeping open clinics. Not all women can afford to travel out-of-state for medication or surgery, the two abortion options. And women of color are likely to be disproportionately adversely affected by the high court’s cave to religious zealotry. One can only assume this will give rise to an abortion underground in red states, particularly for pregnancy terminating drugs that can be used within the first 70 days of pregnancy. How much better for women to be connected to qualified health care than to the kind of backroom procedures provided pre-Roe.

Has the Supreme Court just awakened a political giant? It’s difficult to know for sure. While public opinion on abortion has fluctuated over the last two decades, Americans still overwhelmingly support that right 61% to 37%, according to the Pew Research Center. The question is whether the outrage so palpable today will light a fire under voters in the midterm elections, especially when so much attention is focused on pocketbook issues like inflation and gasoline prices. And beyond that, what will this mean for the nation’s cultural and social framework? Will businesses in red states struggle to recruit women from beyond their borders? Will universities with students? And in Maryland, can voters possibly trust another Republican to serve as governor under these terrible circumstances?

But that is a problem for tomorrow. Today, the focus must be on helping women who may soon find themselves with frightening options that may put their health at serious risk. The constitutional right to choose has been recklessly cast aside at the federal level. It is now up to the states to uphold that important freedom.

(Baltimore Sun editorial writers offer opinions and analysis on news and issues relevant to readers. They operate separately from the newsroom.)