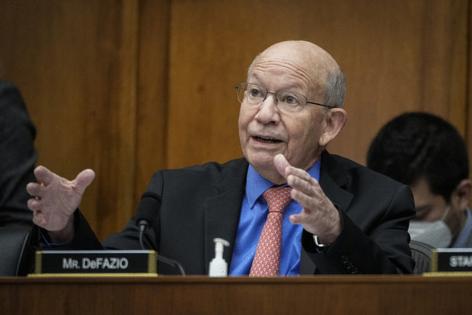 He may spend his days thinking about transportation, but Rep. Peter A. DeFazio is ready to be done with airplanes.

“I have one of the longest commutes in the Lower 48,” says the retiring Democratic chair of the House Transportation and Infrastructure Committee, who will soon trade those flights for a little fly fishing.

DeFazio has always sought out the wilderness (“I don’t like hiking in a line,” he says of the crowded options near D.C.), but it was his former boss who showed him how complex that could be in western Oregon.

“I was there a number of times when he was poking some timber baron in the chest and saying, ‘You can’t have it all,’” DeFazio recalls of the late Jim Weaver, a fierce environmental advocate and his predecessor in the House.

As a staffer for Weaver in the late 1970s and early 1980s, DeFazio got a taste of how heated the issue could get.

“Forest policy is like religion in this district,” where hippies and survivalists mingle with loggers, cannabis growers, college students and everything in between, the Democrat says. “I’ve tried to find a balance. I’ve had people in Roseburg call me an eco-terrorist. I’ve had people in Eugene throw sawdust at me.”

At least one thing hasn’t changed since his staffer days. “I just wanted to be back in the forest,” DeFazio says.

He sat down this month to talk about his memories of Weaver, a run-in with Capitol Police and his 11-hour commute. This interview has been edited and condensed.

Q: How did you get started working for Weaver?

A: I was in graduate school studying gerontology, and I wasn’t particularly involved in politics. But I got the paper, and I kept reading about this guy Jim Weaver who was out there fighting to save the old-growth and wilderness areas in Oregon. I thought, “Boy, this guy’s got a lot of guts.”