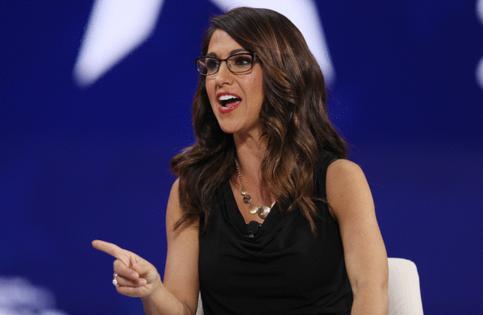 The far right-wing lawmaker yucked it up with a group of supporters by telling them that she was uncomfortable sharing an elevator at the Capitol with the Somali-born U.S. Congresswoman from Minnesota, one of two Muslim women to serve in Congress.

“Well, she doesn’t have a backpack. We should be fine,” Boebert said.

Boebert’s Islamophobic jibe drew guffaws from the all-white gathering of her supporters.

She went on to label Omar as a member of the “jihad squad,” a custom bigoted insult combining Omar’s Muslim faith and her political alliance with the progressive so-called Squad founded by Rep. Alexandria Ocasio-Cortez, D-N.Y.

Boebert claimed to be relating a recent incident at the Capitol when she inadvertently interacted with Omar.

The staunch supporter of former President Donald Trump says she was shocked to spot a cop rushing towards an elevator. That’s when Boebert saw Omar, whom she claimed was the target of the officer’s concern.

“I see a Capitol Police officer running hurriedly to the elevator. Stress is written all over his face,” she said. “That’s when I look to my left and I see Ilhan Omar.”

Omar accused Boebert of making up the entire incident and being a brazen anti-Muslim bigot who refuses to make eye contact with her if they cross paths.

There was no immediate word on whether Boebert would face any disciplinary action for her racist remarks.

MAGA ally Rep. Paul Gosar, R-Ariz., was censured by the Democratic-held House of Representatives for posting an anime video showing him killing Ocasio-Cortez. But Republicans rallied around him.