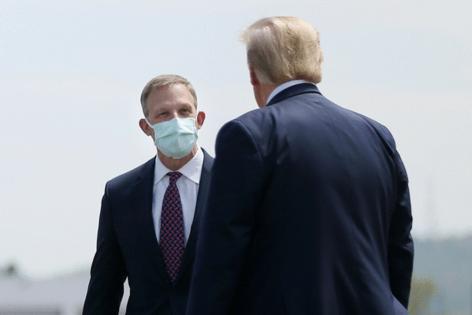 U.S. Rep. Scott Perry — who led the House charge to throw out Pennsylvania's votes in the 2020 presidential race — has been elected as the new chairman of the Freedom Caucus, the hard-right group that for years has often steered GOP politics in the House by defying compromise and clashing with party leaders.

Starting in January, Perry, from the Harrisburg area, will follow in the footsteps of previous Freedom Caucus leaders such as Mark Meadows, who went on to become President Donald Trump's chief of staff, and U.S. Rep. Jim Jordan of Ohio, one of the most pugilistic and recognizable Republicans in Congress. The job could give him a national platform as the leader of Congress' most combative and conservative faction.

Just this year, Perry has used incomplete and discredited information to try to throw out Pennsylvania's 2020 presidential vote — including in a speech on the House floor just hours after the Jan. 6 riot, as lawmakers resumed their attempts to overturn the election. He was one of 21 House members (compared to 406 in support) who voted against awarding Congressional Gold Medals to Capitol Police who fought the rioters, arguing that it would include a "politically motivated" narrative.

He was one of 62 House members who opposed a bill to fight anti-Asian hate crimes and one of just 16 who voted against a bill to speed up visas for Afghans who had aided American officials or troops. He later said he did so out of concern that poorly vetted Afghans could lead to "little girls raped and killed in the streets."

And in April, Perry appeared to echo white supremacist "replacement theory" that argues white people are being usurped. In a hearing on the surge of migrants to the U.S. Southern border he said: "We're replacing national-born American — native-born Americans, to permanently transform the landscape of this very nation."

Yet for all the controversy and outrage from his critics, there appears to be little Democrats can do to stop Perry and unseat him from a district that encompasses Dauphin County, including Harrisburg and Hershey, and parts of York and Cumberland Counties. They made him a top target in 2018 and 2020 elections, and fell short both times.

Now, Republicans have the political wind at their backs and Perry could play a major role in steering policy debates, especially if the GOP wins back the House next year, as it is favored to do.

WASHINGTON — As the U.S. braces for a busy holiday travel period, the Biden administration’s decision Tuesday to sell 50 million barrels from the Strategic Petroleum Reserve should lower gasoline prices in the short ...Read More

WASHINGTON — Congress is considering a bill that would require critical infrastructure operators and federal agencies to report any cyber breaches and attacks to the top federal cyber agency, but the FBI wants to be in ...Read More

If you’re worried about the direction of the nation, the state of the economy or the sharp rise of price inflation, you’re not alone.