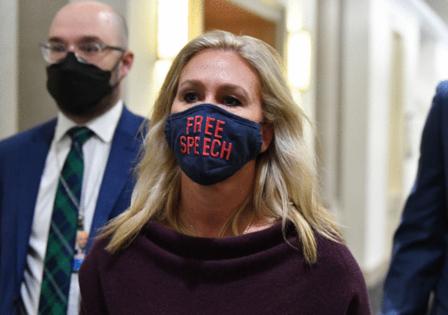 The far-right firebrand has been fined a total of $5,500 for three violations of Congressional rules requiring lawmakers to wear masks on the House floor to limit the spread of COVID-19.

The outspoken opponent of masking and vaccination mandates, who had to apologize for comparing mask rules to the Nazi Holocaust, was hit with a third fine Monday.

Greene, a staunch supporter of former President Donald Trump, did not appeal the fine but did sound a defiant note in a statement

“I’m taking a stand on the House floor because I don’t want the people to stand alone,” she said, apparently referring to anti-vaxxer conspiracy theorists who object to being ordered to help keep a lid on the killer pandemic.

The House Ethics Committee, which is tasked with enforcing the mask rules, also announced that Rep. Andrew Clyde, R-Ga., a MAGA ally of Greene, was also fined for breaking the same rule.

The mandate was lifted earlier in the year, but reinstated in the summer amid the surge in COVID-19 cases blamed on the virulent delta variant.