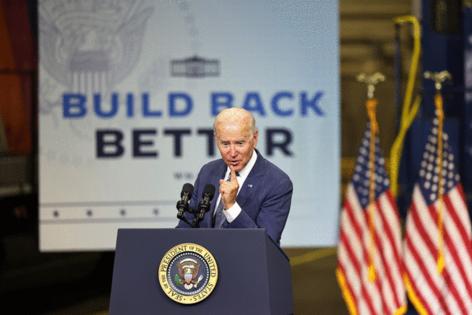 Flanked by NJ Transit locomotives, Biden told a handpicked audience of elected officials and union workers that his twin infrastructure and social spending plans are must-pass legislation for the New York region and the rest of the nation.

“These bills are about competitiveness versus complacency,” Biden said in the repair facility in Kearny, which is outside Newark. “They are about leading the world instead of letting the world pass us by.”

After being introduced by a fourth generation rail worker as “the transportation president,” Biden vowed to improve lives and livelihoods in the region by rebuilding the North Portal Bridge, a notorious choke point for Northeast Corridor rail traffic in north Jersey.

He also trumpeted the entire $30 billion Gateway project connecting the Garden State to New York City as a necessary antidote for decades of delays that 21st century economic competitors do not tolerate.

“Aging infrastructure is more than a nuisance,” he said. “It’s an impediment.”

“This project that is key to the future of our states, our region, and the entire country’s economic well-being,” Schumer said.

Biden praised Democrats of all ideological stripes, including Rep. Josh Gottheimer, D-N.J., who is a leader in the moderate wing of the party aiming to trim back his Build Back Better expansion of social spending.

He preached the gospel of party unity as the path to winning a huge victory whether the eventual price tag is $3.5 trillion as progressives are pushing or closer to half that as moderates want.

“Let’s get it done,” Biden bellowed.

Biden earlier visited a Plainfield elementary school where he promoted his plans to increase funding for education, implement universal free prekindergarten and extend the child tax credit for parents.

Democratic leaders say they are confident they can bridge remaining differences and reach agreement on both the Build Back Better and separate $1.2 trillion bipartisan infrastructure plans by a self-imposed deadline of Thursday, when Biden jets out to two overseas summits.