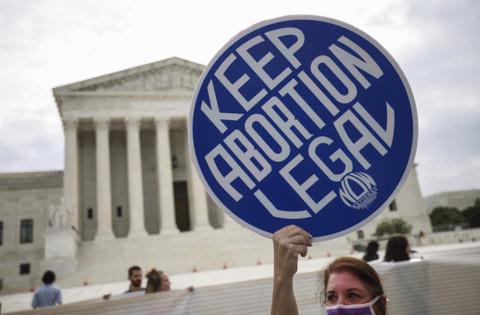 It's the latest attempt by the federal government to block the law.

The announcement came hours after a federal appeals court sided with Texas officials a second time and kept in place a previous order by that appeals court to suspend a lower court ruling that had blocked the law.

A three-judge panel of the U.S. 5th Circuit Court of Appeals ruled 2-1 late Thursday, refusing a request from the U.S. Department of Justice to let stand a lower court ruling by a federal judge in Austin blocking enforcement of the Texas law.

Texas Attorney General Ken Paxton celebrated the decision in a tweet, calling it "a victory for life!"

But the Supreme Court, which previously allowed the law to go into effect by declining to intervene at the request of Texas abortion providers, may get a second look.

A Texas ban on most abortions after six weeks of pregnancy, signed into law by Gov. Greg Abbott, remains in effect after a federal appeals court again sided with the state.

The Texas law is the most restrictive in the nation and includes a unique enforcement provision that is at the center of the ongoing legal battle.

Senate Bill 8 prohibits government officials from enforcing the ban and instead allows any private individual to sue abortion providers or those who aid or abet abortions in violation of the law. Successful litigants can collect at least $10,000.