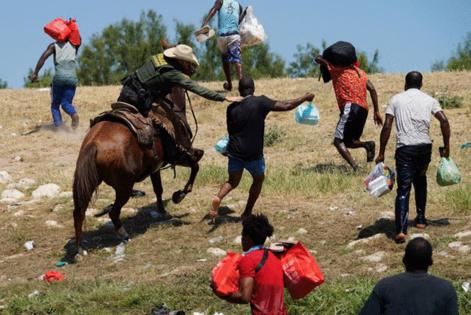 WASHINGTON — President Joe Biden on Friday denounced the treatment of Haitian migrants at the border as “horrible” and promised that “there will be consequences.”

“It’s outrageous,” he said. “I promise you, those people will pay.”

He added that there’s an investigation underway into how Border Patrol agents on horseback confronted Haitian migrants. Some appeared to swing their reins like whips.

Vice President Harris echoed Biden’s concerns on Friday, saying she was “outraged” by how the agents on horseback treated Haitian migrants, saying the situation “evoked images of some of some of the worst moments of our history, where that kind of behavior has been used against the indigenous people of our country, has been used against African Americans during the time of slavery.”

“Human beings should not be treated that way,” she said.

Harris’ comments came during an interview on “The View,” an appearance that was disrupted after co-hosts Sunny Hostin and Ana Navarro tested positive for COVID-19 and escorted off the set. Harris had planned to be interviewed on the set but, instead, spoke remotely by a video-link with the remaining hosts.

The Biden administration has faced political pressure from all sides over his handling of the border.

Republicans have blasted him for the number of migrants that are crossing into the country from Mexico, while Democrats and human rights advocates have criticized the administration’s aggressive enforcement policies that began under President Trump.

Thousands of Haitian migrants, many seeking asylum, have sheltered under a bridge in Del Rio, Texas.

But Homeland Security forces are increasing the number of repatriation flights to return them to their Caribbean island, which has suffered political upheaval and earthquakes.

Some migrants have crossed back into Mexico in an effort to avoid being returned to Haiti.