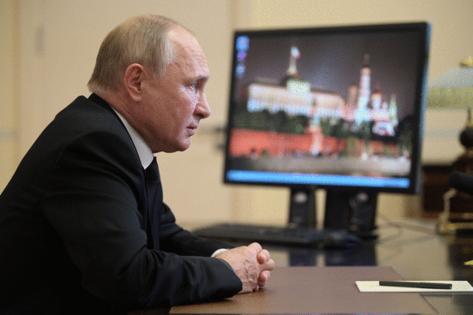 The electoral farce that took place in Russia last week was hardly interesting as a political event: Once again, the main Kremlin-backed party, United Russia, retained a constitutional majority in parliament in a procedure that only President Vladimir Putin’s propagandists could deem free or fair; this time around, the Organization for Security and Cooperation in Europe couldn’t even send observers because of restrictions imposed by the Russian government.

That doesn’t mean, however, that the rest of the world has nothing to learn from what happened. Anyone interested in how democracy, whether real or imitative, functions in the age of technology should pay attention.

The pure political promise of tech to society — formulated as a dream rather than a set of policy proposals — is that the free exchange of information on impartial, hard-to-block internet platforms should make censorship impossible, and that people should be able to cast their votes electronically in a way that renders tabulation shenanigans obsolete. Both parts of this dream were subverted and sullied in Russia on Sept. 17 through Sept. 19, in ways that have implications far beyond Russia’s borders.

Much has been written already about the acquiescence of Alphabet Inc.’s Google and Apple Inc. to the Russian government’s demand that they remove from their app stores an election-related app developed by the team of jailed opposition leader Alexey Navalny. The app helped anti-Kremlin voters find candidates to support strategically so that United Russia would lose seats. The Russian government threatened criminal charges against the tech giants’ local staff if they failed to comply.

The logic behind the government demand will be familiar to Americans, especially those who believed in the “Russian interference” narrative following the 2016 presidential election. In a transparent mockery of that narrative, the presence of an anti-Kremlin app on foreign — U.S.-based — platforms was construed as election interference. Just as U.S. authorities forced Facebook Inc. to counteract Russian propagandists’ attempts to reach Americans with promoted political content, the Russian internet censor, Roskomnadzor, made its demands of Google and Apple.

You might think the lesson here is that Google and Apple are pliable and will keep doing whatever they can to keep their business in Russia. For example, if Apple can consider scanning iPhones for child pornography (a controversial move it now has delayed), why not, at the Russian government’s request, for banned “extremist” content?

Yet how far the tech companies are willing to go, and how low they are willing to bend, to save their business in an authoritarian-run country is almost beside the point. Russia’s behavior shows that such regimes won’t hesitate to chase them out. The Apples and Googles of this world hardly pay any local taxes, and to the regimes, the services they provide are fungible.

In Russia, home-grown Yandex, not Google, is the internet search leader with a 60% market share; as for iPhones, Russians can do without them if they have to, especially given Android’s more than 80% share (and yes, Russians can also do without Google Services on their Android phones, just like people in China). The government believes that a local “sovereign” solution can be offered in any area of tech. Prime Minister Mikhail Mishustin recently broached the idea of a Russian GitHub; with government backing, why not? Plenty of developers working for state companies or on state orders would put their work on it.

If U.S. Big Tech decided to take a stand and refuse to follow orders, one could easily imagine Russian regulators heaving a sigh of relief as they impose a total ban on their services, which would severely limit ordinary Russians’ access to them without messy workarounds.

That’s the real learning here: In any country where the authorities don’t want U.S. tech companies to carry local political content, they have the means to force compliance — or kick out the Silicon Valley companies. The tech kings have no clothes in the eyes of restrictive regimes; there’ll always be a local or Chinese alternative without any censorship resistance built in. Users won’t riot if they lose Google, or Twitter, or Facebook — they’ve learned to live without French cheese or Polish apples, banned in Russia since 2014, and they’ll make do with whatever replacements are on offer.

In the legislature, before courts, in local governments, and on the campaign trail...Read More