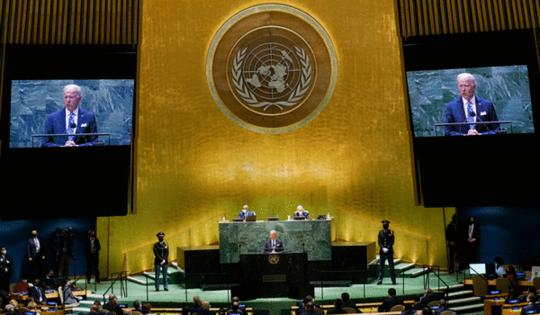 At the U.N. General Assembly this week, President Joe Biden told the world again that America is back at the table. He championed global cooperation as the only way to address today’s global challenges, making clear that it not only benefits the international community but is essential for American interests and national security too. It was a direct repudiation of the nationalist “America First” approach taken by then-President Donald Trump at the same assembly four years ago.

This speech six months ago would have been a comfort to friends and allies, jarred by the uncooperative Trump years. But in the wake of several nationalist moves and unforced errors on the world stage, Biden’s words rang hollow to many. If Biden doesn’t start living up to his promise of positive, multilateral engagement and diplomacy, America will pay the price.

The administration’s actions haven’t looked cooperative. Biden’s message about the urgent need to vaccinate the world is unconvincing in the face of continued vaccine nationalism at home. While the administration hoards booster shots for every American, less than 4% of the population in Africa has received the first two doses.

The United States has barred travelers from most of the world for 18 months, even as other countries have welcomed Americans. Many of these countries are managing the pandemic better than we are. These rigid restrictions not only harmed business but kept families separated through traumatic times. Since the U.S. has continued to allow Americans to travel in and out while COVID-19 rages here at home, it hardly serves as an effective health protocol.

Europe reopened to American travelers in June, imposing reasonable vaccination and testing requirements to enable business and tourism to return safely even as American COVID-19 numbers rose. The White House announced Monday that it would relax some travel restrictions by November, including allowing vaccinated Europeans, but we get little credit at this late stage for future promises. The damage of missing the entire summer travel season two years running is done.

Biden’s assurance now that the United States still seeks to return to the Iran nuclear deal was little comfort given America’s failure so far to take serious steps to do so. What should have been a relatively easy lift months ago became less likely with the inauguration last month of Iran’s new hard-line president, Ebrahim Raisi.

European allies have complained heartily about the Afghanistan withdrawal too — both the fact that it happened and how it went down, calling discussions with the U.S. administration less consultations than declarations. Biden was committed to the withdrawal for good reason, but a little more respect for allies’ concerns could have gone a long way to minimize damage.

And then came the AUKUS submarine scandal, in which the U.S., the U.K. and Australia spent months brokering a secret deal on nuclear-powered submarine sales to replace Australia’s $60 billion contract to buy conventionally powered submarines from France. The jilted party was reportedly only given a few hours’ notice that the deal was off. The French would have been upset regardless, but hard conversations early on and reasonable attempts to mitigate losses would have been well worth the investment to avoid rupturing trust with an important ally.

Though the tone has been less crass than the Trump administration’s America First approach, the message hasn’t strayed far. The unapologetic focus on short-term U.S. interests puts an unnecessary strain on important relationships that Biden will need as he pursues a global coalition to address the challenges we face today.

It’s possible the Biden administration stumbled into this trend unwittingly. As a former diplomat, I understand the bureaucracy involved in navigating foreign policy decisions. Most of these were decisions to maintain a status quo, after all. The power of inertia can’t be overstated, so these own-goals may be more the result of risk aversion and bureaucratic impediments than a conscious decision to stay the Trumpian course.