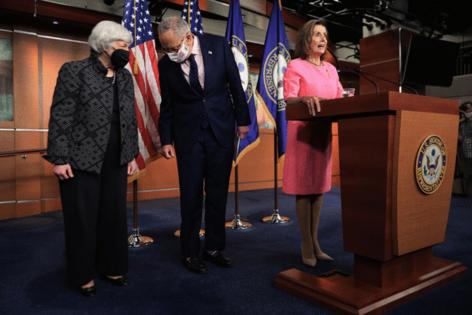 WASHINGTON — The Biden administration “reached agreement on a framework” with House and Senate Democrats on how to pay for their budget reconciliation package, Senate Majority Leader Charles E. Schumer, D-N.Y., announced Thursday.

Any breakthrough on financing could resolve long-standing disputes among Democrats that have stymied progress on a sweeping tax and spending package designed to fulfill most of President Joe Biden’s domestic agenda.

“It’s a menu of options and it will pay for whatever” the agreed-to price tag ends up being, Schumer said.

The announcement of a preliminary agreement, described only in vague terms, came one day after Biden held talks at the White House with warring factions of the Democratic caucus in an effort to broker a deal. Moderates have balked at a $3.5 trillion price tag, while progressives have been unwilling to vote for a bipartisan infrastructure bill unless the reconciliation package is passed in tandem.

Speaker Nancy Pelosi, D-Calif., suggested at a news conference that a final price tag was not yet settled. But she said Democrats had reached agreement in broad terms on the elements of the package and ways to pay for it.

“We have plans that are not punitive … but we do want everyone to pay their fair share,” Pelosi said.

She said the House Budget Committee would soon announce they’ll be marking up that chamber’s reconciliation package, cobbled together from 13 committees, in a “timely fashion” in order to get it to Rules where changes could be made.

But Pelosi and Schumer offered little explanation of the agreement. Pelosi described it as “an array of agreements that we have depending on what the need is.”

Senate Finance Chair Ron Wyden likewise wouldn’t divulge details of the apparent offsets pact, except to say he was in the discussions when the agreement was reached.

“We’ll have some more to say later,” the Oregon Democrat said. “I’m going to stay with the statement that we all joined in together … this goes through the Finance Committee, it went right to the heart of what we need in terms of tax fairness in America. And that’s where we are this morning.”