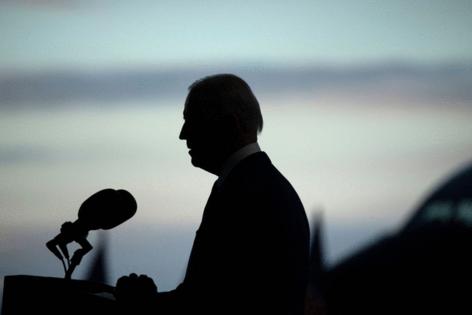 President Joe Biden’s recently unveiled budget marks a new era in U.S. economic policymaking. Decades of trickle-down tax cuts are out the window; Biden is betting that trickle-up economics will deliver the kind of sustained and equitable growth we all want. But that's a dangerously short-sighted strategy that in the long term will create far more stagnation than a Reaganomics agenda that overstayed its welcome.

Biden is proposing a very large expansion of government spending, to 25% of GDP from 20% before the pandemic. The plan represents a massive redistribution of wealth from companies and higher earners to middle and low-earning Americans. The White House wants to use tax increases on corporations and high earners to generate about $4 trillion in additional revenue over the next 10 years, then redistribute it to different sectors of the economy, including higher wages to caregivers and cash benefits to families with children, subsidies for more well-paid union jobs, and investment in infrastructure projects like repairing roads and bridges, with a lot of money ($186 billion) to “spark widespread adoption of electric vehicles.”

Those ideas are a big break from the last half century of government policy and how economists have viewed growth. Trickle-down economics was the signature of the Reagan era: the idea that if you cut taxes on companies and the wealthy, they would invest that money productively in the economy and we’d all benefit with more jobs and higher living standards.

We do have higher living standards than we did in the 1980s and we're richer by many measures, but trickle-down didn't live up to its full promise. Growth has slowed, so has innovation and productivity, and there is widening income inequality.

The Biden administration would like to try a new approach. One of the president's economic advisors, Heather Boushey, favors a philosophy that aims to spark growth by redistributing wealth and income. She argues that because consumption accounts for 70% of GDP each year, it stands to reason if we take resources from rich people who save more of their money, and give it to poorer people who spend more, we’ll increase consumption and have a bigger economy. That's the essence of Biden's trickle-up strategy.

And there is some truth to it, at least in the short run. If you're in a deep recession where people are afraid to spend, there's a benefit to boosting consumption. But as a long-term growth strategy it's deeply flawed. First, it's inflationary and less sustainable because you have more demand chasing the same amount of goods. The only sustainable way to boost consumption is through innovation: creating new products or finding more productive ways to make things.

Second, it means there's less money for investment because we're spending instead of saving. Economists in the Boushey camp think the U.S. economy has too much money locked away in savings. But that argument originated in the early 2000s when American financial markets were awash in capital from abroad. Foreign countries sent us enough of their savings that we could get away with saving less ourselves. That's less true today — a reminder that international capital markets can be fickle and it's risky to shape long-term policy around them.

In the long to medium-run a nation needs a stable source of saving to finance the kind of innovation that drives growth. Trickle-uppers in the Biden administration believe that innovation will come as companies respond to rising consumer demand for more goods. But that misunderstands the nature and history of innovation. Innovation designed for mass consumption tends to be the least productive.

Take the steam engine, which was one of the most important discoveries that made everything in our modern world possible. It took more than 100 years before it was widely used and began to show up in productivity estimates. Often the biggest and best innovations initially have nothing to do with consumer goods; how we use the next big thing is rarely predictable. Making new products and technology is usually expensive at first. In the early days of significant inventions, they're only accessible to richer people, as with air travel and cars. But as time goes on, we discover their broader uses and we find new ways to make new technology for less money, making it more widely available.

It’s not clear that slower growth and falling levels of investment in the U.S. is really a failure of trickle-down economics. Perhaps there are just fewer productive investments around. That's probably why firms are engaging in more share buybacks. The decline could also reflect an economy where big companies acquire smaller firms who innovate rather than innovating themselves. Or that innovation has shifted toward intellectual property instead of physical capital.

Or maybe it's just that investment goes in waves and things will change without massive intervention, as has happened in the past. Just like the steam engine, a breakthrough today may spur new investment tomorrow. In any case, reducing the gains from investment by taxing corporations and capital income more heavily will only make investment and the upsides of risk-taking less attractive going forward.

Biden's budget has some good things in it, such as expanding broadband and investing in education. But a better approach would be for him to also keep the best of Reaganomics: empowering the private sector to lead the recovery, nixing deductions and loopholes in the tax code and keeping tax rates low.

While relying entirely on trickle-down economics didn't fully deliver on growth, relying too much on trickle-up will be worse because it can’t deliver sustainable long-term growth. We may want a more equal economy for moral reasons or because it's better for society, but Biden's approach won't deliver more growth, too. Trickle-up works better for redistributing the pie rather than growing it. We need to find the balance.