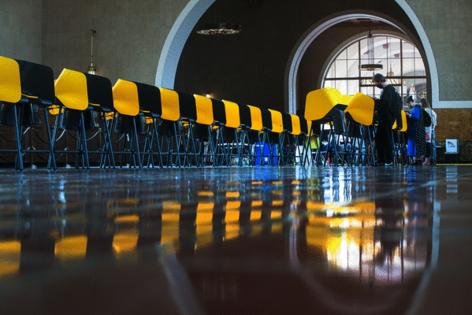 The GOP has been flailing a little in recent weeks, as an election once expected to be a typical midterm blowout has tightened considerably. If the GOP expects that older voters will bail them out as in elections past, our advice is, think again.

The folk wisdom, of course, is that older voters are more conservative — an idea with at least some statistical support. There is an entire media ecosystem geared to rattling the fears of us older people. At Fox News, where the median viewer age is generally put at 68, there’s always some new scary myth (migrant invasions, antifa rioters). And there’s also the widespread sense that the old hearken back to some more homogenized past — as one commentator hewing to the stereotype put it recently, “The people who historically turn out (to vote) are older white folks who long for the good ol' days when a man could support his family, and those uppity (insert invective here) knew their place.”

But those assumptions don’t survive a brush with the data, at least not in this election cycle. It’s true that older voters backed Donald Trump in 2016, but that support began to wane considerably in 2020; earlier this year some pollsters started noticing a pronounced shift. And if you look at the cross tabs of recent surveys, you find some fascinating results.

Look at, say, the Senate race in Wisconsin, where 67-year-old white guy Ron Johnson is taking on 35-year-old not-white-guy Mandela Barnes. In a September Marquette University survey, Johnson gets his highest unfavorable ratings from likely voters over 60; Barnes finds his biggest supporters in that same group, and by a large margin compared with younger voters.

Or take a look at Arizona — plenty of old people there, and another hot Senate race between Trumpish Blake Masters and liberal Mark Kelly. In an August Fox News poll, seniors give Kelly his largest margin of any cohort, 51-38 — compared with, say, 46-39 for those under age 45. The latest polls, happily, show younger people emulating their elders.

Results like this don’t surprise us. We think, in fact, we have a pretty good idea of what’s going on.

Some of it is enlightened self-interest. The GOP has been making alarming threats about Social Security and Medicare. South Carolina Sen. Lindsey Graham, who would likely lead the budget committee in a Republican Senate, has called for “entitlement reform”; Rick Scott, the chair of the National Republican Senatorial Committee, has talked about “sunsetting” all federal legislation and specifically wants to “review” and “fix” Social Security, which was created by legislation. Wisconsin’s Johnson thinks Social Security and Medicare shouldn’t be automatically funded but voted on every year.

Our hearing may not be quite as good as it once was, but dog whistles still resonate; the average Medicare recipient has an income of $30,000 a year, so we old folks pay attention.

But there’s also something deeper at work here. Older people today mostly aren’t looking back to some bucolic, Hallmark card existence as their touchstone. If you are in your 60s or 70s or early 80s now, some of your youth was spent in the epic maelstrom that was the 1960s, a time of immense cultural change. The people who didn’t trust anyone over 30 are now at least twice that age themselves, and their formative years include supporting precisely the things that today’s GOP is targeting.

Consider: Many of the laws that the Supreme Court is weakening, blocking or overturning were the product of our cohort: the Voting Rights Act of 1965 (which followed the epic registration drives led by young activists in the South), the Gun Control Act of 1968 (which followed the generation-shaking assassinations of Sen. Robert F. Kennedy and the Rev. Martin Luther King Jr.), the Clean Air Act of 1971 (after young people organized the first Earth Day) and Roe v. Wade in 1973. Those of us past 60 spent a good part of our lives with guardrails in place so most Americans could vote, with some kinds of restrictions on assault weapons, with a federal government trying to clean up pollution and with women exercising control over their bodies. If we were going to be conservative, this is what we’d be conserving!

The slogan of our organization, Third Act, reflects that activism: “We won these fights once, we can win them again.” But, in fact, older Americans are not stuck in the past — we’re also eager to take on the challenges that have arisen in our lifetimes, climate change chief among them.

We recognize we’re responsible for much of the damage and we know that our children and grandchildren will have to live with the results, so while we’re still here we’re trying to do what we now can to turn things around. (Among other things, we can pledge to cut up our credit cards from the four biggest American banks, who are also the four biggest lenders to the fossil fuel industry.) Our age group wants what we’ve always wanted: a caring and free society.

And we’ll make our power known on election day too. One piece of conventional wisdom about older Americans is very true: We believe in voting. There’s no way to keep us away from the polls. Which should worry the Republicans a little, because we’re not your grandparents’ grandparents.