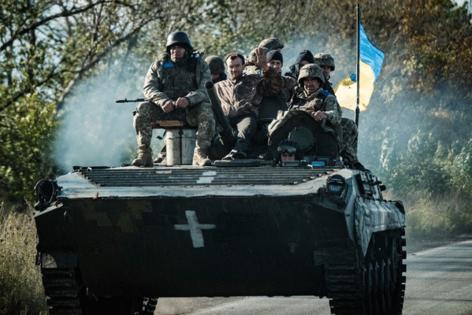 Russian President Vladimir Putin tripled down on the war in Ukraine in a short but defiant televised speech on Tuesday. Politically, he announced that a series of referendums on joining Russia would be held in the conquered territories of eastern Ukraine this week. Militarily, he repeated previous not-so-veiled threats to use nuclear weapons, and announced a mobilization of 300,000 reservists to be thrown into his flailing “special military operation.”

All these choices smack of desperation and an attempt to thread a narrow needle: Putin wants Russians to believe that everything is going fine and that ultimately he will conquer Ukraine; but he also knows that with as many as 80,000 troops killed in action or wounded in just over six months of war, he simply must get more soldiers into the fight.

The referendums are largely meaningless, with preordained outcomes that no informed observer or the United Nations will take seriously. The nuclear threat is a repetition of Putin’s bluster from months ago. He is highly unlikely to use even a low-yield tactical nuclear weapon given the obvious threat of starting World War III and also the immense damage it would do in his efforts to keep Brazil, India, Nigeria, South Africa and other large nonaligned countries in neutrality.

But the mobilization of 300,000 troops is worth examining as a matter of military analysis. What does the decision to call in reserves say about the state of the war, and how should the West react?

When I was supreme allied commander of the North Atlantic Treaty Organization, I participated in exercises with many reserve troops, including those of three non-NATO countries with exceptional systems: Finland, Israel and Switzerland. (Finland is currently in the midst of the NATO accession process.)

Finland and Israel are small nations with a history of being invaded by their immediate neighbors — Russia in the case of the former, and various Arab nations for the latter. Both have universal conscription (males for Finland, both sexes for Israel) that flows into a highly ordered, motivated and exceptionally well-equipped reserve force. I came away with deep respect for their capabilities.

Another country with incredibly ready reserves is neutral Switzerland. The military tradition there is deeply respected and woven into Swiss culture, from highly trained fighter pilots to troops mounted on racing bicycles. Every time I flew over Switzerland in NATO aircraft, I would look with admiration to the left and right at reserve fighter pilots in high-end jets escorting us over their country.

The Russian reserve system, by contrast, is not highly regarded by outside military analysts. It is based on the vestiges of universal conscription that were in place for decades, and the stories of raw draftees being beaten, abused and starved are legendary. (See, for example, “One Soldier’s War” by Arkady Babchenko for a snapshot inside the brutal system.) It is also shockingly corrupt. When soldiers get out of uniform — after brutal wars in Afghanistan, Chechnya and Syria — they want to get as far as they can from the army.

Once discharged, former soldiers are loosely tracked by the Russian state. In contrast to modern Western militaries, there appears to be very little systematic training, no organized equipment maintenance or operations, and no in-depth ties with standing units and missions. While there are a few reserve units in the model of U.S. system, they are small and inadequately supported by the larger armed forces.

Ominously for Russia, the mobilization order places the onus for recruitment on various governors of Russian regions, under a system of quotas levied by the defense ministry. This demonstrates that there is no broad, structured reserve to which the Russian military can turn. Additionally, the decree allows for further call-ups down the road, and offers bonuses to the reserves who come forward, much like the incentives offered to convicts in Russian prisons to go and fight.

It will be a Herculean administrative task to provide uniforms and training for 300,000 troops, find qualified leaders at the officer level, provide them with effective equipment, and get them integrated with communications and logistics. It will be months before a significant number can be brought to bear in combat. Then, almost certainly, they will become yet another wave of cannon fodder launched at Ukrainian positions.

The Ukrainians, knowing they may eventually be facing a much larger force, will prepare their own responses. They will be seeking (and probably receiving from the West) systems that can negate large numbers of foot soldiers: close-air attack planes, tanks and artillery, mounted machine guns, precision mortars and long-range surface-to-surface missiles.

The Russians being pulled off the street in this mobilization will face a highly motivated, extremely well-armed and very innovative foe in the Ukrainians. The War of Putin’s Ego continues, and many of these 300,000 poor souls are likely to pay the ultimate cost for his folly.

James Stavridis is a Bloomberg Opinion columnist. A retired U.S. Navy admiral, former supreme allied commander of NATO, and dean emeritus of the Fletcher School of Law and Diplomacy at Tufts University, he is vice chairman of global affairs at the Carlyle Group. He is the author most recently of "To Risk It All: Nine Conflicts and the Crucible of Decision."