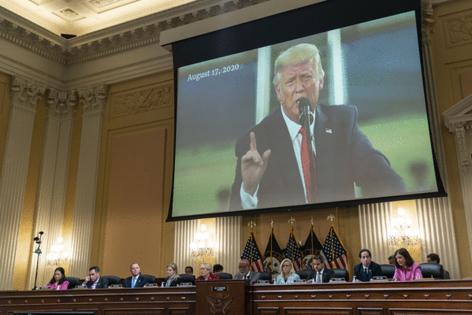 The right question is: Are we able to justify NOT prosecuting him?

The answer seems obvious: In a nation that aspires to operate according to the rule of law, if one breaks the law, one must be held to account.

In fact, you and I, ordinary citizens, reasonably expect that if we get caught breaking the law, we will be prosecuted.

But a former president isn’t an ordinary citizen. There are reasons to hesitate before bringing charges against Trump.

For one thing, prosecuting political rivals is the most basic instinct of authoritarians. For example, just before the 2020 election, President Trump publicly pressured Attorney General William Barr to bring charges against Obama-era officials that Trump accused — without evidence — of spying on his campaign.

And few elements of Trump’s presidency are more unseemly, threatening and less American than Trump and his subalterns leading chants at his rallies of “Lock her up! Lock her up!”

So prosecuting political rivals — no matter how guilty they are — is a path that Democrats must tread very cautiously.

Further, prosecuting Trump will do nothing to reconcile our deeply divided body politic. A surprising number of Americans share with Trump his delusion that the election was stolen. Many of them have not watched the testimony before the Jan. 6 House committee. Many are angry and well-armed. Many are uninterested in the evidence against Trump and are bound to see any attempt to prosecute him as a purely political attack.

Do we really want to prod that disgruntled sleeping bear?

But, again, the question is not whether we should prosecute Trump. The question is: How do we fail to prosecute him and still call ourselves a nation of laws?

The evidence against Trump becomes clearer at every Jan. 6 hearing. Against the counsel of his advisers — except Rudy Giuliani — Trump mounted a systematic, if somewhat clumsy, campaign to overturn the 2020 election. Jan. 6 House committee chair Bennie Thompson used the apt term “coup” to describe Trump’s attempt to pressure Vice President Mike Pence to delay the certification of the Electoral College votes, the brazen effort to submit false rosters of electors from battleground states, the effort to pressure Georgia Secretary of State Brad Raffensperger to “find” 11,780 votes and Trump’s incitement of a mob to march on the Capitol and “fight like hell.”

Trump’s defenders note that the coup didn’t succeed; Joe Biden was duly inaugurated on Jan. 20, 2021. Perhaps, in the interest of national comity, it would be better to judge Trump “not guilty” by reason of ineptitude and move on.

The problem, of course, is that the coup is still in motion. Trump has yet to concede the election, and a staggering number of Republicans still argue that the election was stolen. Republicans are running for office on that lie and are making organized efforts to install election deniers in positions of power. The coup that failed may have much better prospects in 2024.

The metaphors are a bit overused, but I cannot think of better ones: Trump Republicans are playing hardball. They’ve taken the gloves off. The thirst for power is clearly illustrated by the maneuvers that resulted in the overturning of Roe v. Wade last week. Democrats are terribly naïve to think that Republicans devoted to Trump will hesitate to use any measure, democratic or not, to acquire a firm hold on all branches of government.

Our republic’s founding required courage. If the revolution of 1776 had failed, as Ben Franklin put it, “most assuredly, we shall all hang separately.” The Founders’ lives were on the line.

But maintaining our republic requires courage, as well. Democracy is not for the faint-hearted. If our republic is to survive, power must be met with power. In the case of Trump, Democrats have the force of law and justice behind them. They must not be afraid to use it.