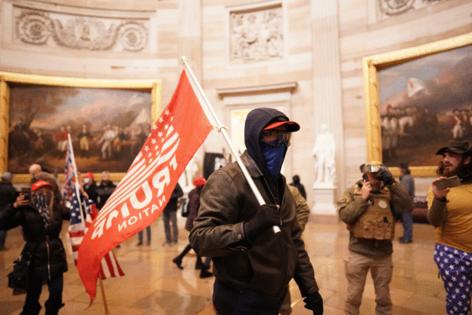 Days after the Jan. 6 assault on the U.S. Capitol by a mob of Donald Trump supporters intent on overturning Trump’s election loss, freshman Rep. Cori Bush of St. Louis introduced her first piece of legislation, which called for the expulsion from Congress of any member shown to have colluded with that effort.

Though Bush’s resolution isn’t in legal force today, it makes a constitutional argument that deserves renewed attention: The 14th Amendment, approved in the wake of the Civil War, specifies that members of Congress who engage in “insurrection or rebellion” against the United States or give “aid and comfort” to its enemies cannot hold seats in Congress.

Those old standards could prove newly relevant, with new reporting suggesting evidence that multiple Republican House members helped lay groundwork for the attack. If the pending House probe confirms it, then both common sense and the Constitution dictate those members must go.

Rolling Stone reports that two unnamed rally organizers provided the magazine with “extensive details of explosive allegations that multiple members of Congress were intimately involved in planning both Trump’s efforts to overturn his election loss and the Jan. 6 events that turned violent.”

They claim that more than a half-dozen Republican House members — a familiar roster of right-wing extremists that includes Reps. Marjorie Taylor Greene of Georgia, Lauren Boebert of Colorado and Paul Gosar of Arizona, or their staffs — were in communication with pro-Trump activists before the riot. Gosar allegedly told the two planners that Trump could offer them a “blanket pardon” for an unrelated investigation if they would help plan the protests.

Anonymous sources talking to a magazine is one thing, but the two sources, along with a third planner, reportedly are also talking to congressional investigators. Their allegations don’t arise in a vacuum. The very week after the riot, yet another rally planner, right-wing activist Ali Alexander, came forward to allege that several of those same House members were in fact directly involved in organizing the protest that turned violent.

Bush’s January resolution was worded in a way that it could be interpreted as calling for the expulsion of more than 100 Republican House members who voted to overturn a valid election that day. That’s tempting, but overreaching. Cynical, wrongheaded and anti-democratic as those votes were, those members undeniably had the legal right to cast them.

But the resolution also provides a solid constitutional argument for removing any House members found to have more directly colluded with organizers of the deadly protest, leaning on that sharply relevant Civil War-era language. What happened on Jan. 6 unquestionably qualified as insurrection or rebellion against America’s government. If it’s shown that sitting members of Congress had any active role in lending aid and comfort to those who committed it, they have no business serving in the People’s House.