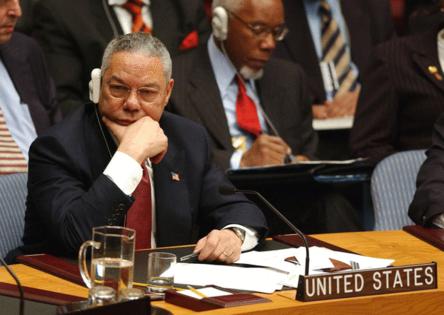 They awoke Monday to BREAKING NEWS that they knew, deep down, meant they’d be in for a patch of very tough message politics — and there was damn well nothing they could do about it.

They are the operative elites of the shattered remains of their once-Grand Old Party. And there on their news screens they were watching one of their own, Andrew Card, who had been President George W. Bush’s chief of staff, memorializing the stunningly unexpected death of four-star Army Gen. Colin Powell, who famously served as Bush’s secretary of state yet infamously made that 2003 speech to the United Nations Security Council he regretted ever since.

On Feb. 5, 2003, Powell justified the U.S. invasion of Iraq and toppling of Saddam Hussein by assuring the world that Saddam’s Iraq had a smorgasbord of weapons of mass destruction. But then he discovered he’d been fed dead-wrong intelligence by Vice President Dick Cheney’s team and CIA Director George Tenet’s agency. Devastated, Powell made it his mission to admit to the world that America had no intel evidence that proved Saddam had biological, chemical and certainly not nuclear WMDs when he gave that speech — and never found any in the years the U.S. occupied Iraq.

This past week, in memorializing Powell, Andy Card hauled out our most timeless cliché of commendation. He praised Powell as the former secretary of state, Joint Chiefs of Staff chairman, national security adviser and field commander who would always “speak truth to power.”

But as Washington’s Republican elites sipped their morning coffees, they knew that speaking truth to power wasn’t what really set Powell apart from the rest of the Grand Old Pack. The most impressive thing was that Colin Powell had the inner resolve to speak truth to the guy in the bathroom mirror. And after doing that, Powell had the guts to later stare into the camera lenses, look you in the eye, and tell you the very same truths he had admitted to the guy in the mirror. No matter how devastating those truths might be to professional reputation and his personal core.

Looking back at this past week’s wall-to-wall coverage of Powell’s sweeping career in which he was America’s military and diplomacy leader, we can now appreciate the core reality that made him the iconic go-to figure in the Washington that has since become a moral ghost town.

Namely: In our constitutional democracy, when Powell had the guts to speak the truth to the guy in the bathroom mirror — and then repeat that same truth to all of us — he was indeed speaking the ultimate truth to our democracy’s ultimate power: we the people. So Andy Card was right, after all. (Whether he ever thought of it that way or not.)

Today, the ultimate reality that has shaken — and threatens to shatter — our democracy is that President 45 won attention and then the presidency by pushing his birther lies about where Barack Obama was born. Then he tried to explode our democracy by spreading fear that he would work to defeat his party’s officeholders unless they backed his lies that his 2020 defeat happened only because the election had to have been rigged.

And this is what has shaken us to our constitutional core: Today we have a Capitol filled with Republican elites who know every word I’ve just told you is true. But they are politically afraid to tell you, the people, that truth that should be self-evident.

Ironically, Powell could have prevented today’s misery from ever happening. In 1996, Powell declined pleas from pols to run for the Republican presidential nomination — which he probably could have won. And he may well have defeated incumbent Bill Clinton and become America’s first Black president. And all that followed would have been very different. Including, most probably, America would never have had a President Donald Trump.

As it was, in 2008 Powell endorsed Barack Obama as a transformational figure; he was appalled that his friend, GOP nominee John McCain, picked an abominably unqualified running mate (Sarah Palin). And in 2020, Powell felt he had no choice but to endorse Joe Biden.

Then, after Trump’s encouragement of the insurrection riot of Jan. 6, Powell went on CNN and told Fareed Zakaria that the prominent Republicans’ refusal to condemn Trump’s lies was the reason “I can no longer call myself a fellow Republican.” And in mid-interview Powell began talking directly to his former fellow Republican elites:

“Come on, guys. You can make it in private life if you don't get reelected. But right now we need you to be real Americans, who we can trust, who will tell the truth.”