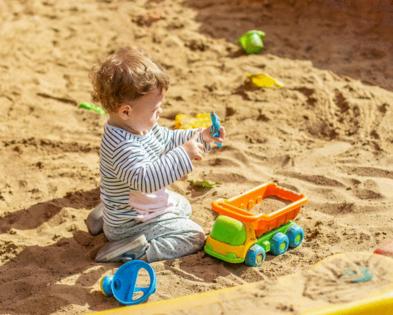 "We need to stop stigmatizing what's acceptable for certain genders and just let kids be kids," said the bill's author, Democratic Assemblyman Evan Low of San Jose. "My hope is this bill encourages more businesses across California and the U.S. to avoid reinforcing harmful and outdated stereotypes."

Some business groups think the government shouldn't be telling retailers how to market their goods, but I think this law is a pretty small ask. If nothing else, it raises awareness of the way we impart subtle and constricting messages about gender to our kids.

And anyway, some big retailers such as Target have already made those changes in response to customer demand. Some of that pressure was brought to bear in 2015 by Abi Bechtel, an Ohio mom of three boys who tweeted a photo of an aisle sign in her local Target that said, "Building Sets/Girls' Building Sets." ("Don't do this, @Target, she wrote.")

In recent years, McDonald's has taken a lot of flak for its custom of offering gendered toys with Happy Meals. The company said it has asked employees to stop inquiring about the gender of their customers — and simply ask which toy they prefer.

Earlier this year, Hasbro said its Mr. Potato Head brand would be dropping the "Mr." so that children could create their own potato head families, free of gender expectations.

Some clothing designers and retailers are heading toward genderlessness (which, I guess, used to be called "unisex").

The world has definitely shifted on its axis since my now-adult daughter was a toddler.

I had vowed to raise her to be herself and not conform to anyone's expectations of what a girl is supposed to be. But the forces of commerce exerted a strong gravitational pull toward the pink side.

In 1996, when Chloe was 3, we visited a Toys R Us, the once-formidable retailer that has almost disappeared.

"We recently found ourselves in a toy store," I wrote in this newspaper at the time, "bedazzled by the sheer pinkness of the girl toy aisles. Now here is a place where the gender lines are drawn in indelible ink.

"In girl aisles, you find infinite numbers of dolls and games such as 'Sealed With a Kiss,' where the object is to stamp a kiss on a picture of a 'hunk' more times than the other girls, and 'Dream Phone,' a (what else) pink plastic telephone for dialing a girl's 'secret admirer.'

"Boy aisles are dark and 'dolls' is a dirty word. ('Action figure,' to you, pal.) You will not find games in the boy aisles that involve dates, kisses or romance in any form.

In retrospect, I don't think we were being told anything perceptive about our children, who have a vast range of preferences. Instead, we were drowning them — and ourselves — in preconceived commercial ideas about gender and behavior.

Toy companies were hammering us over the head with the idea that girls and boys have rigid and well-defined identities. Of course, that is so much hooey.

Riley's video, which was picked up by news organizations, has been watched more than 5.2 million times.

In recent years, the country has undergone a sea change it its view of gender roles, of gays and lesbians, nonbinary or gender-fluid people and transgender people.

It is simply nothing out of the ordinary to see representations in popular culture of all strains of human sexuality and gender identity.

Same-sex marriage is so common as to be unremarkable. In 2011, the military dropped its atrocious Clinton-era "Don't ask, don't tell" policy.

Despite the inane battles over bathroom access, the country seems well on its way to embracing the civil rights of trans people. Was it scandalous in any corner when Caitlyn Jenner decided to run for California governor earlier this year? Or when President Biden appointed Rachel Levine as his assistant secretary of Health, making her the first openly transgender federal official to be confirmed by the U.S. Senate?

The idea that gender and sexuality are fluid concepts is trickling down. Last year, at the end of fifth grade, my niece came home and announced that several of her friends were "bi." A week later, they had changed their minds. I think.

Last week, she told me about a friend who changed her name and wanted to use the pronouns "they/them." We had an interesting conversation — using the new pronouns — and talked about how it can be difficult to remember that someone you always thought of as a girl no longer wants to be one.

The vibe at Donald Trump’s Des Moines rally Saturday could best be characterized as macho combative. Self-righteous aggression oozed from the paraphernalia at a long line of vending booths outside the Iowa State ...Read More

Questions like which came first, the chicken or the egg, are irrelevant because they’re unanswerable (although for the record, scientists come down on the side of the egg.) Here is a more relevant and important question....Read More

Author and policy expert Robert Kagan drew broad notice with his Washington Post essay declaring that the nation is "already in a constitutional crisis" and may be on the cusp of "mass violence," but he is hardly the first...Read More