Offense and Controversy are Necessary in a Free Society 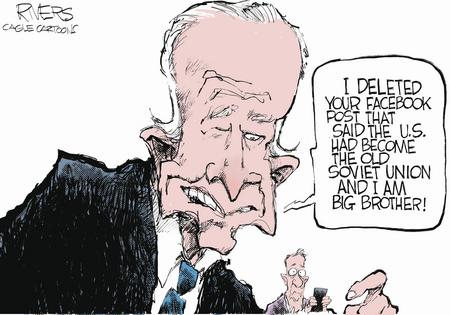 The other day, someone reminded me that I had a public Facebook page entitled “Christine Flowers, Columnist and Radio Host.” I rarely post there, which is why I’d almost forgotten about it.

My old editor had suggested I create a public page after stalkers and people who didn’t like what I wrote (almost exclusively readers and agitators from the left) had done some very unsavory things. She thought that setting up a “public” space would protect me and my loved ones from the usual abuses of social media.

But then a friend sent me a screen shot of my Facebook page, which included a warning advising possible readers that “This page may share content that violates our community standards. Review this page before you join.”

Because you see, it is virtually impossible to know what comments or photos or other things that fall into the class of free expression trigger Mark Z. and the woke elves who toil away at that shop of his near the North Pole, or wherever. There is no definitive standard by which thoughts can be considered “dangerous” or “offensive.” It’s kind of like when Justice Potter Stewart set out the criteria for obscenity, namely, “I know it when I see it.”

I suppose I shouldn’t be surprised at this new high-tech imprimatur. The same thing is happening on Twitter, except not in such a targeted manner. The other day I tried to reply to a tweet about Nancy Pelosi’s belief that abortion is a civil right for poor women, and it immediately triggered this message: “Want to review this before sending? We’re asking people to review replies with potentially harmful or offensive language.”

I am certain that I used the word “beast” in my reply, since I find Pelosi’s devotion to abortion to be quite savage. Still, it’s a bit much to start flagging non-threatening comments to a public figure with a finger wagging 21st century Miss Brooks (for those of you who have no idea who that is, Google it).

I suppose a lot of this is in response to the events of Jan. 6, which have completely thrown the country off of its axis. There are those who liken it to a terror attack, those who think it was nothing more than a group of rowdy tourists, and those like me who think it falls somewhere in between the two.

Social media was blamed for allowing conspiracy theories to be foisted upon an innocent public by twisted minds with access to keyboards. That, of course, could describe the internet well before that crazy shaman fellow with the Ride of the Valkyries outfit forced himself into the capitol building.

But the left is using Jan. 6, and some repentant folks on the right, to advance an agenda that has very little to do with the danger and damage on that winter day, and everything to do with silencing dissent.