Why We Should Be Grateful To Be Americans 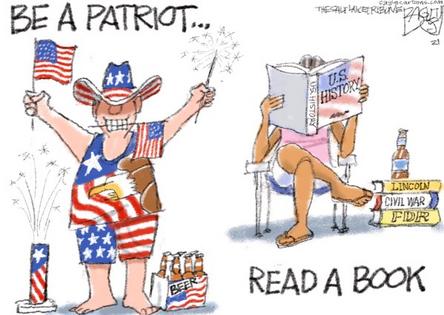 Last week, a client of mine, an abused woman from El Salvador, was granted asylum. You might not think that’s important or impressive. It won’t change the world, and it won’t make the “Breaking News” segment on CNN.

But for my client, it’s monumental. She doesn’t have to go back home to a country where she was sexually and physically abused. Her U.S. citizen children won’t lose their mother. Her sisters might find the courage within them to seek protection. And my colleagues in the bar have some concrete proof that sometimes, in some rare cases, immigrants are on the winning side of the ledger.

Our immigration system, as our criminal justice and civil systems, are designed to do the least damage and the greatest good. I do not believe in the stain of systemic racism, sexism, or bigotry. That places me outside of the loop on the social justice marathon, and I won’t even try and curry favor with those who live by those hashtags like #Metoo and #BLM, which have more to do with being popular than being compassionate. We all do what we think will make a difference, and we all do it with our own biases and experiences weighing down on our shoulders.

But my experience in immigration, person by person, real life by real life, has taught me that this is a country of limitless promise.

My father realized that a generation before I did. He was a child who grew up in foster homes, brother of a biracial sister who was bullied in the streets of West Philadelphia. Here was a teenager who changed the date on his birth certificate so he could enlist in the Army. Here was a young husband and father who worked three jobs during the day so he could attend Temple Law school at night, had to take the subway when his car windshield was repeatedly broken with bricks at Broad and Columbia (now Cecil B. Moore) graduated near the top of his class and edited the Law Review.

And because he was Irish Catholic, and had no political connections and hadn’t gone to an Ivy school, he was turned away by the big WASP white shoe firms. But he did find a job, and before he died at the age of 43, was regarded as one of the most respected, most feared and most beloved litigators in the history of the Philadelphia Bar. Forty years after his death I still get “Christine? Are you related to Ted Flowers?”

But daddy never forgot where he came from, and never forgot the slurs against his half-Asian sister in the wake of World War II, and never forgot the stain of being stuck in foster care. He understood the term “underdog,” because he’d always lived as if everything could be taken away from him tomorrow. He might have suspected that his life would be a short one, blazing but brief.

And because of that, my father went down south in 1967 and used that prodigious, legally trained brain to help Black men and women register to vote, and represented Black defendants in the courts of Jackson and Hattiesburg, Miss. He expressed his love of country and his belief in its promise with actions, not slogans. He was what the Jews would have called a “righteous gentile.”

And I know that people like Gwen Berry, who has been granted all the privileges of citizenship and still turns her back on the flag and the anthem, I know that she gets it too. She knows that in no other country in the world would she be able to show disrespect and hostility for the country that gave her the opportunities she is blessed to have.

She may not care, she and Colin Kaepernick and Jemele Hill and the allies who walk with them.

But my consolation comes from knowing they get it, even though they have a problem admitting it to themselves, and to us.

America’s arms are open to the grateful, as well as to those in doubt. God bless her.