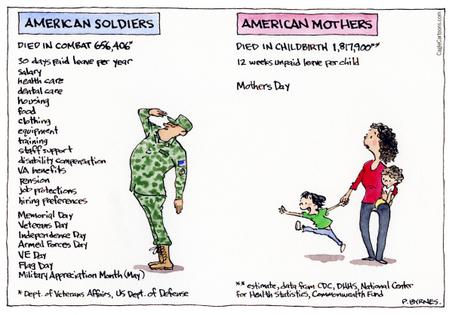 In the hours after the bombshell leak of Supreme Court Justice Samuel Alito's draft opinion toppling Roe v. Wade, I awaited the torrent of Republican-authored press releases vowing to provide every resource the federal government could muster to support the millions of new families they were going to usher into existence.

Of course, that didn't happen.

Instead, I was treated to irony-free press releases from anti-abortion rights forces taking a victory lap now that their decades-long goal of stripping bodily autonomy from half the nation's population was finally within reach.

"In Congress, I have always fought for the dignity of human life. Nothing is more important than life," Pennsylvania Republican Rep. Fred Keller said in a statement. "After nearly 50 years since Roe v. Wade was wrongly decided, I am thrilled that we are closer than ever to delivering historic pro-life protections for the unborn."

After birth, however? That's a different story. The press release page of Keller's congressional website is long on criticisms of the Biden administration, but markedly short of plans that support pregnant people or provide resources to families after their children are born.

And it would be one thing if Keller if was an outlier, but he's not.

The fatal flaw of the GOP's anti-abortion arguments always has been its profound indifference to the fate of the fetuses that they're so intent on forcing pregnant people to carry to term.

It's always been about one thing: Control. Worse, it's an argument that's been made by people who have taken a faith capable of depthless love and life-changing liberation, and weaponized it to marginalize the other.

Because if the inverse were true, we'd have ironclad family leave and paid sick leave laws. We'd have universal preschool and affordable childcare. We'd have an array of pre- and post-natal services for pregnant people. And, critically, we'd have done something about the nation's shockingly high maternal mortality rate — particularly among Black women.