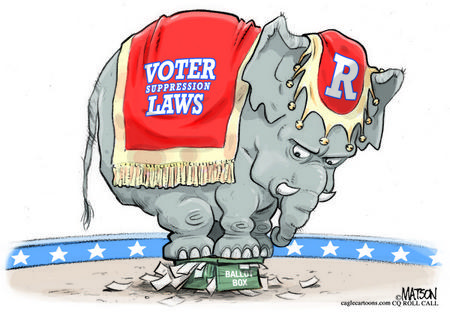 When Pennsylvania Gov. Tom Wolf ran his veto pen across a Republican-authored rewrite of state election law last week that included new voter identification requirements and tighter deadlines for requesting mail-in ballots, Republicans in the General Assembly announced plans to undo the Democratic governor’s handiwork by taking the issue to the voters with a constitutional amendment.

“We have a lame-duck governor, and we’re going to treat him like it,” House State Government Committee Chairman Seth Grove, the bill’s author and legislative shepherd, said. “Maybe the next governor will be more amenable to negotiations.”

This hyper-aggressive legislative parrying of a legitimate exercise of executive authority is just the latest example of a new and worrisome Republican tendency to weaponize the state’s foundational document for short-term political gain.

If left unchecked, it’s a strategy that will rob the amendment process of both its legitimacy and its meaning.

After all, it’s hard to amend the state Constitution for a reason: So that it doesn’t fall prey to short-term whims or shifting political winds.

In Pennsylvania, proposed constitutional amendments have to be approved in identical form in two, consecutive legislative sessions, and then by voters at a statewide referendum.

Governors have no veto power when it comes to proposed constitutional changes.

Which means it will be at least 2023 before any potential amendments appear on the ballot. Wolf will be term-limited out of office in 2022 after serving the constitutional maximum of two, four-year terms.

“You should not have to change the constitution very often,” Chris Borick, a pollster and political science professor at Muhlenberg College in Allentown, observed. “The U.S. Constitution has been changed for big things: slavery, voting access, but it’s only been done 27 times [in the nation’s history], and 10 of them were done with the Bill of Rights, and that’s why they have gravitas.”

But as was the case with recent voter approval of amendments limiting the emergency authority of Wolf and his successors, a dead-for-now push for judicial gerrymandering, and now with Voter ID which, while publicly popular, already has been ruled unconstitutional by a Pennsylvania court, Republicans are trying to address a short-term setback with a long-term solution that carries with it serious policy consequences and no easily accessible remedy.