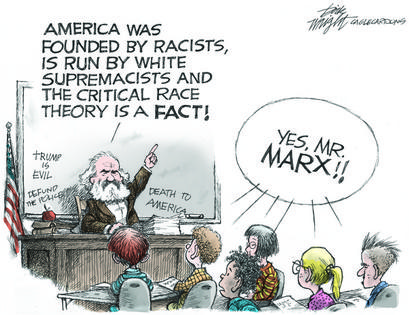 Everyone’s complaining about Congress, but if you want to track the real, festering growth of Trumpism and its corrosive effect on our politics, you’re better served keeping your eye on state capitols throughout the land.

Take my home state of Pennsylvania, where the Republican-controlled state House kept itself busy last week by advancing bills that expand gun rights and restrict the rights of people who can get pregnant. Those solutions in search of a problem come even as some lawmakers seek to ban transgender scholastic athletes from competing in sports that correspond to their gender.

And as if that were not enough, two GOP House lawmakers threw another log on the culture war fire last week, as they began seeking co-sponsors for legislation that would ban the state’s 500 school districts from teaching what’s broadly referred to as “critical race theory,” and withhold taxpayer funds from districts that run afoul of this ill-conceived proposal should it ever find its way into law.

The fight over critical race theory, which scholars view as an overdue attempt to educate public school students on how racial disparities are embedded in U.S history and society, has become the latest bete noire of the right, with conservatives arguing that teachers are trying to inject race into what they think is a colorblind system.

The Pennsylvania proposal echoes that contention, arguing that “our schools should be teaching that every individual is equal under the law and that no individual should ever be labeled superior or inferior simply due to their race or genetic makeup, nor be held responsible for actions taken by others with similar traits.”

Such teachings, the lawmakers further argued, “interfere with our constitutional duty to support and maintain a thorough and efficient system of public education to serve the needs of the Commonwealth.”

Which, of course, is nonsense.

But that hasn’t kept such efforts from proliferating nationwide, as GOP lawmakers have succeeded in pushing it to the top of state legislative agendas, NC Policy Watch reported last week.

Governors in Idaho and Oklahoma already have signed measures to forbid the teaching of critical race theory in schools this year. Arkansas’ Republican governor let a similar measure become law without his signature, while proposals in Iowa and Tennessee are waiting for their governors’ approval.

Lawmakers in North Carolina, Arizona, Louisiana, Missouri, Texas, Utah, West Virginia and other states have waded into the debate, as well, although some of those efforts have failed.

Whenever I write about Republican-led efforts to sharply curtail voting rights (which disproportionately impact Black and brown voters who ...Read More