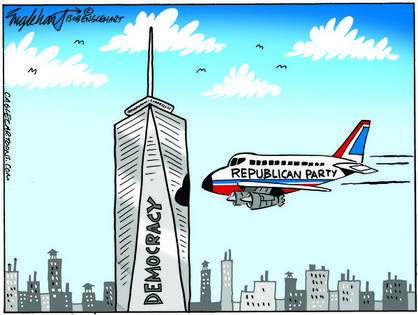 Whenever I write about Republican-led efforts to sharply curtail voting rights (which disproportionately impact Black and brown voters who tend to support Democrats), I’ll often get a letter from aggrieved conservative readers who remind me, “John, you of all people should know we’re a republic and not a democracy.”

Strictly speaking, those readers are correct. We’re not a direct democracy. But the notes came with such startling regularity, that I had to ask myself: After decades of sending American forces around the world to spread and defend our very particular brand of democracy, what did conservatives suddenly have against it?

The answer came in the form of a November essay in The Atlantic by Claremont McKenna College political scientist George Thomas, who argued why the GOP’s sudden insistence on this semantic distinction is a “dangerous and wrong argument.”

“Enabling sustained minority rule at the national level is not a feature of our constitutional design, but a perversion of it,” Thomas argues, pointing to such Republicans as Sen. Mike Lee of Utah, who have been trotting out this corrosive chestnut as a way to justify the limited kind of political participation envisioned by the current incarnation of the GOP.

“The founding generation was deeply skeptical of what it called ‘pure’ democracy and defended the American experiment as ‘wholly republican,'” Thomas writes. “To take this as a rejection of democracy misses how the idea of government by the people, including both a democracy and a republic, was understood when the Constitution was drafted and ratified. It misses, too, how we understand the idea of democracy today.”

He pointed out that President Abraham Lincoln, whom Republicans like to embrace when it’s convenient, “used constitutional republic and democracy synonymously, eloquently casting the American experiment as government of the people, by the people, and for the people. And whatever the complexities of American constitutional design, Lincoln insisted, ‘the rule of a minority, as a permanent arrangement, is wholly inadmissible.’”

And it is indisputable that Republicans are a minority, representing 43 percent of the nation, but holding half of the  Senate, according to an analysis by FiveThirtyEight, which also points out that, while Democrats need to win large majorities to govern, Republicans are freed from this onerous task. And the system is rigged to ensure it continues.

In addition to this imbalance in the Senate, “the Electoral College, the House of Representatives and state legislatures are all tilted in favor of the GOP,” the FiveThirtyEight analysis continues. “As a result, it’s possible for Republicans to wield levers of government without winning a plurality of the vote. More than possible, in fact — it’s already happened, over and over and over again.”

There’s another pattern that emerges if you start examining those who most often make this shopworn argument: They’re white, privileged, and speaking from a position of great power. Thus, it behooves them to envision as limited an idea of political participation as possible.

When it comes to how he feels about big tech, Jeff Bartos didn’t mince his words.

So what can the plight of a little cafe tell you about the state of the American economy and the changing face of work? A lot, as it turns out.

The other week, the bistro where my family and I have been grabbing brunch ...Read More

It all kind of piled up this week.

COVID hospitalizations and deaths are up. We’re still trying to convince the unvaccinated to get vaccinated, even as intensive care units fill beyond capacity. As the Delta variant ...Read More