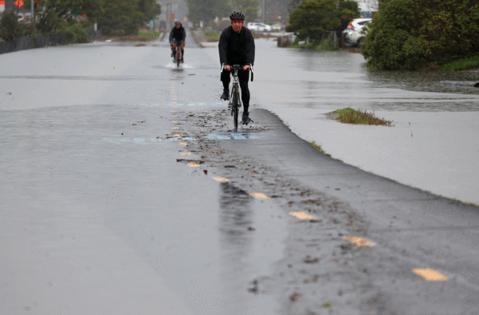 New rainfall totals show that no person alive has ever experienced a three-week period in the Bay Area as wet as these past 21 days. The last time it happened, Abraham Lincoln was president.

From Dec. 26 to Jan. 15, a total of 17 inches of rain fell in downtown San Francisco. That’s the second-wettest three-week period at any time in San Francisco’s recorded history, since daily records began in 1849 during the Gold Rush. And it’s more than five times the city’s historical average of 3.1 inches over the same time.

The only three-week period that was wetter in San Francisco — which is often used as the benchmark for Bay Area weather because it has the oldest records — came during the Civil War, when a drowning 23.01 inches fell from Jan. 5 to Jan. 25, 1862 during a landmark winter that became known as “The Great Flood of 1862.”

“The rainfall numbers over the past three weeks just kept adding up. They became a blur,” said Jan Null, a meteorologist with Golden Gate Weather Services in Half Moon Bay who compiled the totals. “We had a strong jet stream that was bringing in storms, one after another. It was hard along the way to separate the individual storms.”

So much rain fell since Christmas in Northern California that some cities, including Oakland, Stockton, Modesto and Livermore, already have reached their yearly average rainfall totals. In other words, if it didn’t rain another drop until October, they would still have a normal precipitation year.

The parade of soaking storms, which have caused flooding in the Central Valley, Salinas Valley and Santa Cruz Mountains, along power outages, mudslides, and at least 20 deaths statewide, left the Sierra Nevada with statewide snowpack 251% of normal on Tuesday.

Forecasts call for dry conditions, with light rain on Wednesday night, for much of the rest of January. River levels are dropping.

“We’ve gotten so much water, and so much snow, that’s going to help us dry out and dig out heading into late January,” said Daniel Swain, a climate scientist at UCLA. “It’s really good news because it takes off the trajectory toward worsening flooding.”

The fact that the past three weeks’ rainfall was eclipsed only by the winter of 1862 — a legendary disaster in California history on par or worse than many of its biggest earthquakes — doesn’t mean that a similar fate is likely to occur this spring, experts said.