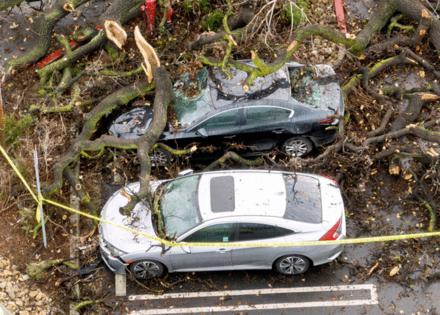 LOS ANGELES — The atmospheric river storms that pummeled California for weeks inflicted "extensive" damage to as many as 40 of the state's 58 counties, and total repairs could reach as much as $1 billion, according to authorities.

The damage included more than 500 landslides, piles of dirt and rocks blocking roads and power outages due to fallen trees.

The estimated cost is likely to change as teams of local, state and federal officials on Saturday began damage assessment that is expected to continue for several weeks, according to Brian Ferguson, a spokesperson for the Governor's Office of Emergency Services.

President Biden on Saturday approved an Expedited Major Disaster Declaration, ordering federal aid to be provided to recovery efforts in areas of California that were affected by the storms. All 58 counties are able to access hazard mitigation assistance, meaning the federal aid can be given to state and local governments and specific nonprofits to reduce risk to life and property.

Federal assistance will reimburse local and state governments for 75% of the cost to repair infrastructure and other necessities. It will also provide assistance for individual programs based on need and how much insurance residents have, according to Ferguson. The local governments for the most damaged areas could pay as little as 8.5% of the cost.

In Merced, Sacramento and Santa Cruz counties, residents will have access to assistance to replace or repair damaged property and other services; nonprofit organizations in those counties will receive federal aid to provide emergency work and debris removal.

The storms, which began after Christmas and continued until this week, dumped rain across the state, resulting in the deaths of at least 20 people, prompting evacuations and flooding rivers and roadways.

The storms brought "significant" damage to Merced, Sacramento and Santa Cruz counties, as well as Monterey, Santa Barbara, Ventura and San Benito along the Central Coast, Ferguson said, adding that there will be "extensive" costs for 30 to 40 counties.

As of Monday, the U.S. Geological Survey had mapped out more than 500 landslides across the state since Dec. 30.

In Monterey County, the Gonzales River Bridge was weakened by flooding and was too damaged to use Tuesday, according to officials. The bridge was blocked with cement rails; it will take two to three weeks before the next steps for repair can be determined. Additionally, over the weekend, a rock slide covered portions of Highway 1 in Big Sur, and the roadway showed "significant instability" after the storms, according to Caltrans.