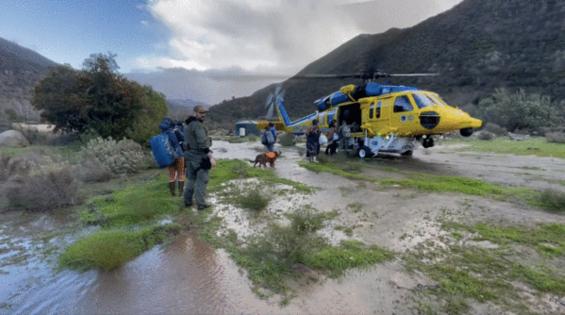 LOS ANGELES — Andre Christou watched as the storms that have drenched much of California over the last two weeks turned from serene to scary in the remote wooded community of Matilija Canyon in Los Padres National Forest. She listened to a swollen creek push boulders down the canyon and saw its muddy, rushing waters swallow trees like sticks.

The Ventura County Sheriff’s Office said 17 inches of rainfall over the course of one week left “towering piles of rock and mud” as high as 40 feet in some locations, blocking the single road into and out of the canyon. A part of Matilija Canyon Road collapsed into a raging creek below. Last week, Christou joined other residents who were evacuated by a Ventura County Sheriff’s Office helicopter.

“We have been staying with friends in town until we find a way to return back home,” said Christou, 56, adding that it’s unclear when that will be. “We’ve turned into nomads for a bit.”

She’s among more than 70 residents who were evacuated by helicopter from Matilija Canyon, according to the sheriff’s department. Ventura County Public Works estimates that it could take three weeks to clear the road and another six months to fully repair it.

“I know there are some people that chose to stay,” Christou said. “They have been living there forever, and they are not about to abandon their homes. They fend for everyone in the community, looking after their houses and pets.”

Showers and wind are expected Monday before the series of storms that have battered California move out. Southern California should see dry conditions beginning Tuesday, while San Francisco, Sacramento and other northern areas of the state will likely have to wait until Thursday.

California has been hit since Christmas by atmospheric river storms, which caused widespread flooding, rockfalls, landslides and fallen trees. The death toll from the storms continues to rise, at more than 20. Over the weekend, an elderly woman was found dead next to a fallen tree branch in San Francisco’s Golden Gate Park following a period of high winds and substantial rain.

On Monday, Gov. Gavin Newsom signed an executive order to bolster staffing for emergency response, waive fees for residents who need to replace vital records such as birth certificates and provide additional support for healthcare facilities in the state and flooded schools in Merced County.

The Biden administration on Saturday approved Newsom’s request for a presidential disaster declaration, which will provide funding for recovery from the flooding, mudslides and landslides in California.

In Ventura County, Brian Briggs said mud took out his fence and poured down his driveway. He and his son spent hours shoveling debris to get the water and muck away from his home.