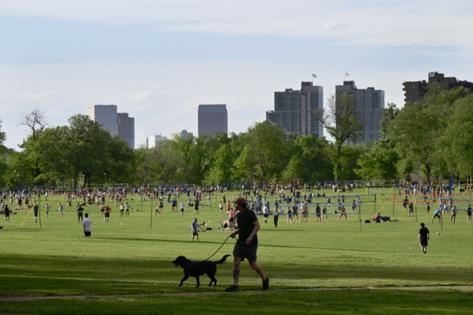 DENVER — Axton Sharpe and Ryan Lawson sat among the unsanctioned tent camps lining the sidewalk about a block from the State Capitol on a 95-degree day earlier this month, explaining how they deal with Denver’s oppressive summer heat.

“Man, it’s awful, just awful,” Sharpe, 53, said from under the shade of his makeshift tarp roof. “You see here, we’ve got no air conditioning or nothing like that. We just hope and pray that each day won’t be as hot as the last.”

Sharpe, originally a resident of Green Bay, Wisconsin, said he came to Denver in 1998 to get away from the cold — though now he sees the irony in that.

“I don’t miss the cold, but I also can’t stand this heat. It gets crazy hot on the pavement here, so you’ll notice a lot of folks go down to the river to try and keep cool,” Sharpe said.

Concern about water supply, crop yield, drought and wildfire conditions were underscored in Colorado after the National Weather Service declared last month Denver’s second-hottest July on record in the past 150 years.

The sweltering heat affects almost everyone, but those who are unable to seek air-conditioned refuge indoors are having a harder time adjusting.

The number of people experiencing homelessness across metro Denver has increased by roughly 800 people, or 12.8%, since January 2020, according to data from the first phase of the Metro Denver Homeless Initiative’s annual point-in-time count for 2022.

And as the homeless population has grown, temperatures in the United States have been rising, climbing about 0.32 degrees to 0.55 degrees per decade since 1979, according to the Environmental Protection Agency.

Peter Goble, a climatologist at Colorado State University, is one of many who attribute the rising temperatures across Colorado, the nation and the world to the effects of climate change.

“We are seeing warmer summers with more regular heat waves in Colorado,” he said. “The last summer with below 20th-century average temperatures was 2009. A streak of 13 warmer-than-average summers in a row would be highly improbable without a warming trend. While climate change is not the only ingredient necessary to produce a heat wave, it is an integral part of the explanation of what we’ve seen in recent summers,”