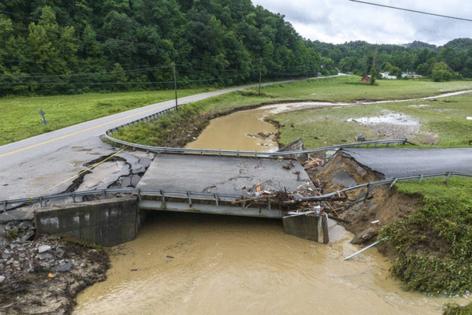 LEXINGTON, Ky. — Six people have been arrested for looting and stealing in Perry County since flooding struck last week and Kentucky National Guard military police were headed to at least two counties Wednesday in an effort to curb crime.

“Keeping people from stealing and looting” and tending to the welfare of flood victims were two of the focuses of the sheriff’s office on Wednesday, he said.

In a statement, Breathitt County Sheriff John Hollan said he had spoken with a Kentucky National Guard representative.

“The 223rd Military Police will be patrolling in the county, due to the imposed curfew and looting,” said Hollan.

Breathitt County has joined other counties and towns, including Letcher County and Hindman, in enacting curfews that generally run from 10 p.m. to 6 a.m.

And it’s going to stay that way throughout the weekend, leading Mayor Michelle Wu to declare the second multiday heat emergency of the past few weeks.

WHITESBURG, Ky. — By 10 a.m. on Monday, Dr. Van Breeding was already on the phone with Colleen Swartz, vice-president of operations at UK HealthCare, begging for supplies.

CHAVIES, Ky. — For the last few days, Jennifer Myers and William Duff have used her father’s pickup truck to get to their jobs at a nursing home, but he needs it back soon to get to his own job, and they’re not sure ...Read More