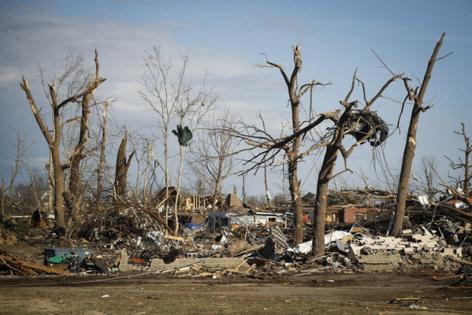 There were twenty disasters that exceeded $1 billion of losses each, according to the National Centers for Environmental Information. They included last month’s tornado outbreak across the Central U.S., wildfires and heat waves in the West, and four hurricane and tropical storm strikes on the Gulf of Mexico.

Last year was the country’s fourth-warmest on record, and there were 21 named storms formed in the North Atlantic, the third most-active season. Six of the warmest years have occurred since 2012.

“Disaster costs over the last five years exceeded a record $742 billion, reflecting the increased exposure and vulnerability of the U.S. to extreme weather and climate events,” the agency said in the report.

Since records began in 1980, the U.S. has sustained 310 separate weather and climate disasters where overall costs and damages reached or exceeded $1 billion, the agency said. The overall cost of all the disasters since 1980 was $2.16 trillion.

The average temperature across the U.S. last year was 54.5 degrees Fahrenheit (13 Celsius), or 2.5 degrees above the 20th-century average.