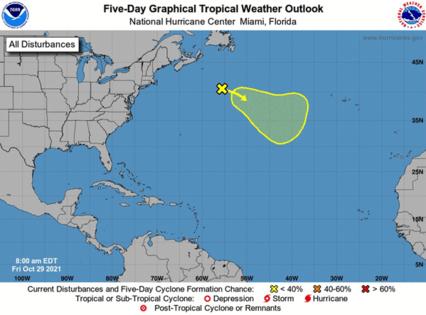 An Atlantic disturbance was hanging in there Friday morning retaining its potential of becoming the next tropical depression as it moves through an area ripe for for development, according to the National Hurricane Center.

The non-tropical low pressure system is a few hundred miles south-southwest of Cape Race, Newfoundland, the NHC said in its 2 a.m. update. The low can’t shake off a cold front, which is preventing the low from becoming tropical . Although meteorologists are expecting the low to move north-northeastward over warmer waters this weekend in the central Atlantic where it could acquire some limit sub-tropical characteristics.

Models forecast a 20% chance of the system becoming a tropical depression in the next two days, and 30% chance by the end of the week, but moving eastward or southeastward over the central Atlantic. The system will not impact Florida.

Not a single major hurricane has formed since Sept. 25 with the formation of Hurricane Sam. There’s only been one other time in tropics history, 1977, where a major hurricane, a storm of Category 3 strength or higher, has not been formed between Sept. 26 to Oct. 28 — which is part of the tail-end of the peak of hurricane season, according to Philip Klotzbach, a meteorologist with Colorado State University.