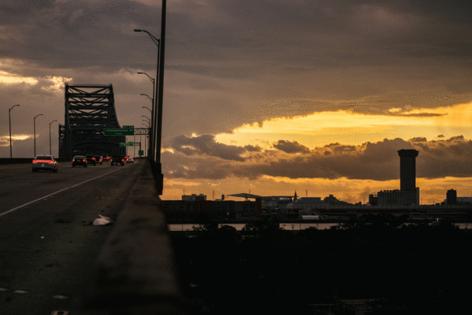 Louisiana, grappling to recover from Hurricane Ida just two weeks ago, is facing another storm and potential flash floods, prompting Governor John Bel Edwards to declare a state of emergency.

Tropical Storm Nicholas has formed in the southern Gulf of Mexico and will gradually strengthen as it comes north along the Texas coast as early as Sunday evening, potentially causing problems for energy production and processing in the area.

Nicholas has top winds near 40 miles (64 kilometers) per hour and was about 170 miles east-southeast of La Pesca, Mexico, the U.S. National Hurricane Center said in a 7 p.m. New York time advisory. The system has triggered a storm surge warning along the Texas coast from Port Aransas to San Luis Pass. Heavy rainfall and possible flash floods are also expected in southwest Louisiana through the middle of the week, the advisory said.

The storm is expected to hit areas of Louisiana that are still recovering from Hurricane Laura in August 2020 and is likely to bring heavy rain to areas recently hit by Ida, Edwards said.

“This tropical storm has the potential to disrupt some power restoration and recovery work currently underway,” he said.

Nicholas is the Atlantic’s 14th storm in 2021, half of which have hit the U.S., and Ida was the season’s worst storm, crashing into the Louisiana coastline before devastating New York with rain and floods that killed more than 40 people. It’s estimated to have caused almost $18 billion in damage that’ll be covered by insurers.

The official forecast calls for Nicholas’s winds to peak at 65 miles per hour, but there is a chance it could even reach hurricane strength later this week, said Jim Rouiller, lead meteorologist at the Energy Weather Group.

“Strengthening appears likely and it will bring a significant risk to the energy production region of the western and eastern Gulf by mid-week,” Rouiller said.

An average Atlantic season produces 14 storms by the time it ends in November, so 2021 is ahead of pace.

Nicholas is about 170 miles east-southeast of La ...Read More