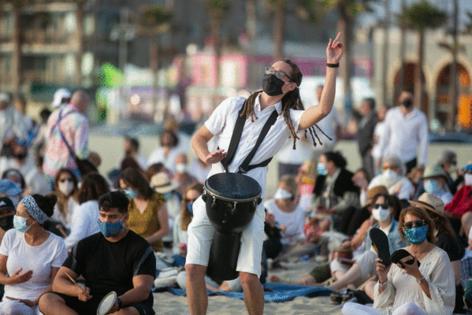 The National Oceanic and Atmospheric Administration on Thursday confirmed what many people felt and saw: California — along with Idaho, Nevada, Oregon and Utah — recorded its hottest ever June-through-August, known as the meteorological summer. Sixteen other states had among their top-five warmest summers.

Nationwide, the heat during those months tied the 1936 Dust Bowl summer as the hottest on record, with temperatures across the country averaging 2.6 degrees above average.

Conditions have become so dire that the California Independent System Operator, which operates most of the state’s power grid, on Tuesday asked the federal government to declare an “electric reliability emergency” that would allow six natural gas-fired power plants — including facilities in Huntington Beach and Long Beach — to generate power at maximum levels, even if they violate air pollution limits.

It is a scrambling effort by state officials to reduce the risk of rolling blackouts in the face of increased energy demands by adding new electricity supplies, including fossil-fuel resources that contribute to climate change and worsening heat waves — a short-term sacrifice that has nonetheless proved controversial among clean energy groups.

The grid operator was granted a similar request during a heat wave last September, but only for a week. This time, the agency is asking for 60 days — a sign that it expects extreme heat could continue well into the fall.

In the short term, Cal ISO has also extended its Flex Alert for a second day, calling on residents to conserve energy amid above-normal temperatures that lead to high demand in California and the Western U.S.

The Flex Alert asks residents to pre-cool their homes and then raise their thermostats to 78 degrees and avoid using major appliances from 4 to 9 p.m. Thursday, when net demand is typically at its peak. It follows a similar alert for the same hours Wednesday.

But energy is only one of many concerns across the state, where more than a dozen large wildfires are burning. Heat advisories and storm-system warnings are promising to bring challenging conditions to firefighters battling the state’s active blazes and residents living in their path.

In Southern California, the National Weather Service is forecasting very hot and dry conditions, with temperatures in some areas expected to be 5 to 15 degrees warmer than normal through Friday.