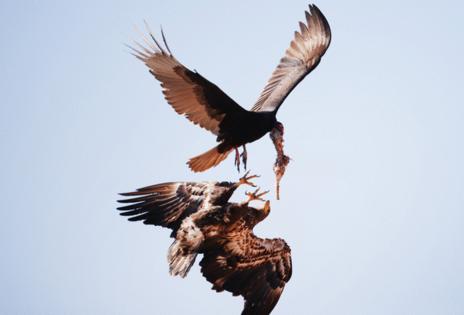 TAMPA, Fla. — It was the morning of Jan. 22 when the fears of Florida wildlife biologists became reality.

Reports of a highly infectious new bird flu strain had been confirmed a month prior in Canada, the launching pad for several migratory bird species that make their way to Florida. Biologists had been watching with anxious anticipation as birds wandered closer.

The dreaded day unfolded when hunters in Palm Beach County turned over two ducks, just shot and killed, for routine disease testing at a checkpoint hosted by the U.S. Department of Agriculture. The pair of blue-winged teal ducks, with a white stripe down their faces and powder-blue wing feathers, were the first two animals in the state to test positive for the untreatable Highly Pathogenic Avian Influenza.

“That was page one,” said Mark Cunningham, a fish and wildlife health subsection leader for the Florida Fish and Wildlife Conservation Commission.

That day kicked off a busy year for Cunningham and his small team of veterinarians and wildlife technicians as they tried to track the unprecedented arrival of the virus. Fast forward 11 months, and thousands of wild birds are estimated dead, including beloved species like bald eagles and great horned owls.

“It’s certainly been a busy year. There really is no comparison,” Cunningham said in an interview with the Tampa Bay Times. “This is the first time we’ve had a highly pathogenic avian flu in Florida’s wild birds. And it’s really blown up.”

More than half of all Florida counties have confirmed or suspected cases of the extremely infectious bird flu strain this year. The epicenter of the outbreak initially emerged in Brevard County and along Florida’s Atlantic Coast in early February, as hundreds of lesser scaup ducks, a common North American diving duck with a black head, began showing signs of neurological distress. It has since spread as far north as Okaloosa and as far south as Miami-Dade.

On paper, the U.S. Department of Agriculture shows roughly 1,450 cases in Florida through November. But the true total is suspected to be much higher than that, Cunningham said. Many cases are presumed positive, but haven’t undergone formal testing. Take, for instance, the state’s black vulture population: A sharp spike in bird flu cases was recently reported in vultures because an infected animal will often return to its roost before it dies. Then its fellow vultures will feed on the virus-laden carcass, spreading the disease further.